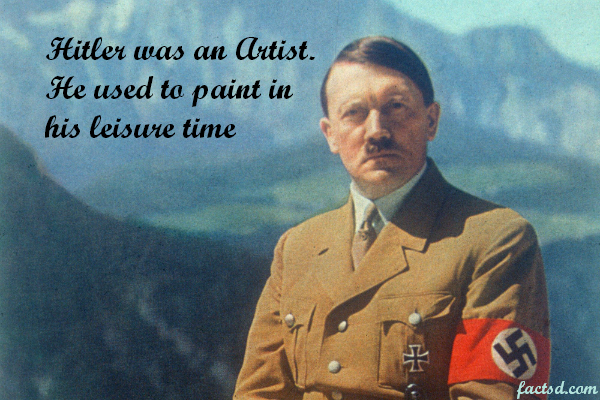 Adolf Hitler facts: Interesting facts about Adolf Hitler. Nazi leader Adolf Hitler is the most hated man in modern history. Hitler’s dictatorship with an idea to erase an entire race, an ambition to take over the world and to show the dominant Nazi policies reveals the man’s capacity on violent acts. Hitler is solely responsible for starting WWII and the Genocide. His beliefs, opinions and ideas made all Germans to follow him resulting in death and destruction. The holocaust made the entire world stumbled upon their feet to stop it. Hitler’s passionate German patriotism was just a pure violence and collapse of his own people leaving behind destruction and death to entire Europe along with Germany. The policies reflect human torture resulting in a death scale of 40 million people and 27 million people of Soviet Union. Hitler’s defeat shows the end of fascism but the rise of cold war just after WWII.

Adolf Hitler as a child wanted to become a Priest but instead played a Demi-God.

Hitler farted a lot, due to extreme gastrointestinal issues.

Plans to assassinate Hitler were cancelled because it was feared that his successor would be more rational and effective in fighting Britain.

Hitler never took off his jacket in public.

Hitler never considered the Chinese and Japanese as inferior to the Aryans; in fact he thought that “their past history was superior to our own.”

Hitler has been the first to run a public campaign on Anti-Smoking.

Hitler collected thousands of Jewish artifacts so that after the war he can build a museum of an extinct race.

Before the Jewish massacre, Hitler given a chance for Jewish refugees to be taken in Great Britain, United States and many other countries but none confronted it. Instead they all refused it.

Hitler had a game plan for Russia where he wanted to turn the entire city of Moscow into a lake.

Gandhi once wrote a letter to his dear friend urging him not to go for war. This friend was Hitler.