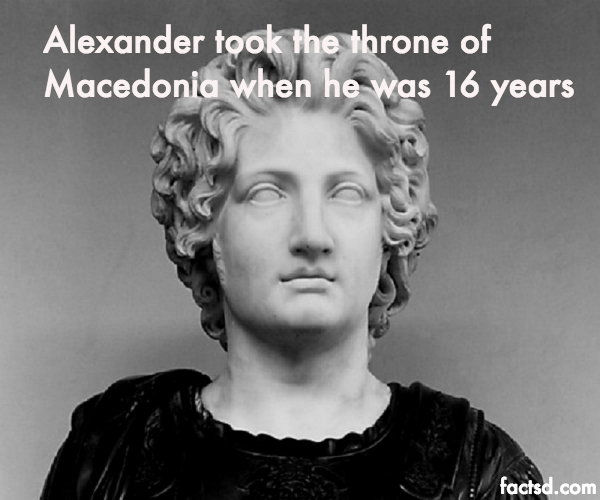 Alexander the Great facts: Interesting facts about Alexander. Alexander the Great can be considered as a brilliant military genius and at the peak of his reign had a kingdom stretching from Greece to modern day Pakistan through Egypt, Turkey and Iran. He tried to amalgamate the East and West during his 13 years rule which was marked with adventurism and expansion desires which led to long military campaigns to the furthest corners of the globe. During his short reign he built upon a god like aura around himself.

He began his reign by brutally eliminating every visage of opposition, anyone who could be a potential spoiler later. His purge included his cousin, the former Amyntas IV, who was executed.

His last wish which was outlined in his last will and testament was the desire to amalgamate the population of Asia and the Europe by intermarriage and transplanting population so that there is a homogenous mix. This will bring the largest continent closer to Europe.

He was also known as Alexander III of Macedon and was the king of ancient empire of Macedon and a member of the Argead dynasty, an ancient Greek royal house from Peloponnese.

Alexander was taught by Aristotle but often was at loggerheads with other teachers and philosophers.

Aristotle was one of the greatest philosophers of the time and he was tasked by Alexander‘s father Philip II of Macedon, to educate the 13 year old prince. Aristotle kept Alexander for three years under his tutelage and made Alexander well verse in politics and world affairs.

Alexander was born to Philip II of Macedon and Olympias who was the daughter of Neoptolemus I, king of the Molossians, an ancient Greek tribe in Epirus.

He was technically at the same time, the King of Macedonia, Pharaoh of Egypt, King of Persia, and King of Asia.

Alexander took the throne of Macedonia when he was 16 years old.