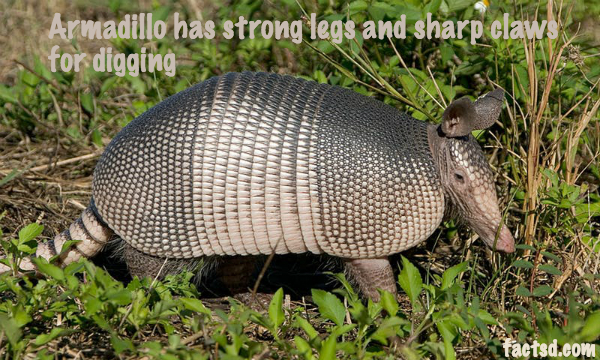 Armadillo facts: Interesting facts about Armadillos. Armadillos are like mammals and give birth to young ones and wean them with milk like any other mammals. However their body has been adapted to their surroundings in the process of evolution. They are special because of the fact that they have an outer shell like covering much akin to tortoise. Their body temperatures are also unique to make them as good specimens for research. The most remarkable feature of this species is the ability of females to postpone their pregnancy if the surrounding environment is not conducive. This is something not seen much in the animal kingdom but for a few. The animal originated in South America and remained land locked and isolated for a major part of time before the formation of the Isthmus of Panama in the early Pleistocene which enabled them to migrate to North America.

Armadillo are barrel shaped animals who have a natural armor for protection.

The armor is effective against most of its enemies but not the vehicles of modern day and frequently gets run over by automobiles.

There are more than 21 species of armadillo from as tiny as 6 inches, the Pink Fairy Armadillo to giant ones which can measure 1.5 meters

The armadillo armor is made up of overlapping plates covering the back, head, legs and tail.

Different species are identified by the number of scales they have on their body.

The three banded armadillo rolls itself into a ball to escape from predators.

Other armadillo dug themselves in soil and expose only their armor and protect their tender stomach.

Armadillo and Anteaters are cousins and both have pointed nose and sticky tongue.

Armadillo eye sight is weak but they are good hunters due to their well developed sense of smell.