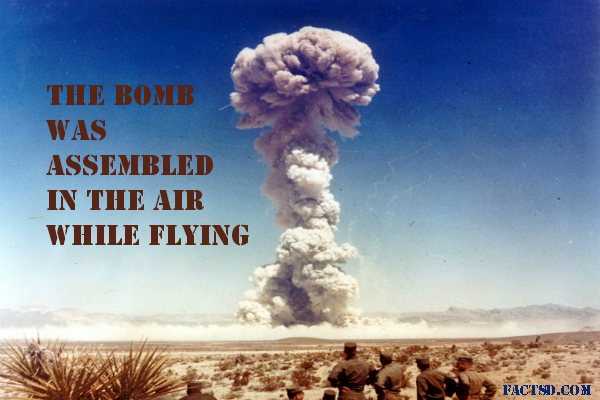 Atomic Bomb facts: Interesting facts about nuclear weapons. As the World War II was drawing to a close, two Atomic bombs were dropped on Hiroshima and Nagasaki in Japan by the United States. The first target was Hiroshima, the bomb was dropped on Aug 6, 1945, and the second bomb was dropped 3 days later on Nagasaki. Though the bombs have wrecked the city but it led to the victory of Allied forces. Mass destruction, loss of lives, ill-health effects that are even felt today are some of the consequences of Hiroshima and Nagasaki bombing. Let’s explore facts about nuclear bombs.

South Africa is the only country to have developed its own nuclear weapons and then voluntarily dismantle them.

Before the bombings America has warned Japanese citizens about the nuclear attack by dropping leaflets and broadcasting messages on radio.

The Japanese radar operators saw the US planes carrying nuclear bomb entering the territory but decided not to interrupt it because the small number was not seen as a threat.

Using iTunes to build nuclear weapons is against their terms of service.

Peace flame is monument for victims of Hiroshima. The flame is burned continuously since it was lit in 1964, and will remain lit until all nuclear bombs are wiped off the face of Earth.

Japanese military attempted a coup when the Emperor decided to surrender.

Bombs on Hiroshima and Nagasaki were dropped with a parachute to slow down its drop and thereby allowing the plane to fly away from the impact zone.

There is over 2 million kg of HEU (Highly enriched uranium). Only 15 to 20 kg of HEU has been utilized to make all the nuclear warheads worldwide.

Several Japanese victims were flown to America to receive plastic surgery ten years after the bombing in 1955.

In an effort to deter nuclear warfare, Robert Fisher suggested the nuclear codes be placed in the chest cavity of a presidential aid. The president would have to physically take a life to use nuclear weapons.