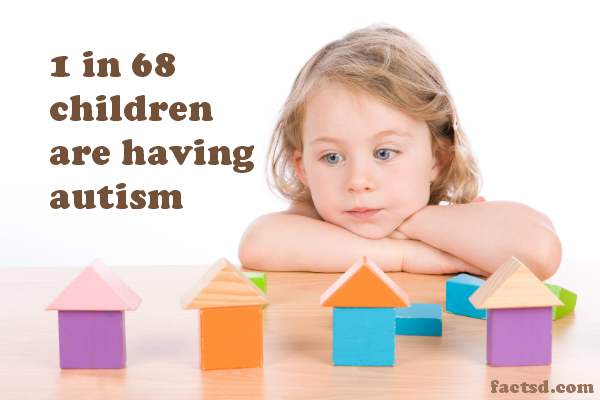 Autism facts: Interesting facts about Autism. Autism is a developmental disability, where the people may communicate, behave, interact and learn differently from most other people. ASD symptoms are present from early childhood and affect daily chores. Individuals with ASD (Autism Spectrum Disorder) differ from one another, some people may need a lot of help in their daily lives, while other need less.

Scientists believe that both genetics and environment are responsible for development of ASD.

It has been found that infants with large head size may develop autism. Infants had small had circumference at birth, but had large heads and brains by 6 to 14 months had developed autism.

Early diagnosis and treatment of Autism can reduce the cost of lifelong care by 2/3rd.

Children born to men who are 40 or more were 6 times more likely to have an autistic children, than those born to men younger than 30.

There are more than 250 Autism Friendly Screenings or AFS in UK, where the lightning is darker, volume is lower and you can take your own food and drink.

Divorce rates are high in families who have an autistic child.

Dogs have been found to improve autistic children’s independence, quality of life and safety.

If a couple is having one autistic child, there are is 5% to 10% chance that their siblings may also have some sort of autistic disorder.

70 million people in the world have autism.