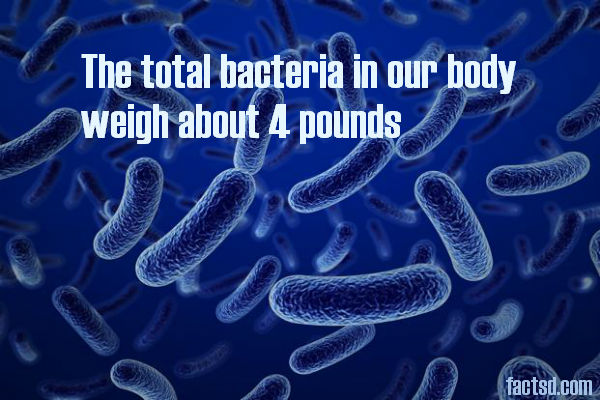 Bacteria Facts: Interesting facts about bacteria. Bacteria have been around for millions of years. They are found everywhere in the air, water, soil, inside body and on skin. Some bacteria get its nutrients directly from the environment while others live inside human and animal bodies. Bacteria can be both beneficial and harmful to human livelihood. Let’s explore more facts about bacteria.

Babies are born with no bacteria in their bodies.

Earwax has antimicrobial properties that reduce the growth of bacteria and fungus in the ear.

Honey is a natural reservoir for Botulism bacteria. While adults can process it, infants can’t. Thus, honey shouldn’t be given to babies.

Human breast milk contains sugars called oligosaccharides that are intended to feed intestinal bacteria, rather than the infant itself.

One teaspoon of the bacterium C. botulinum, if distributed properly can kill every single human being in U.S.

Human bites are the most dangerous animal bites in the world because of the bacteria in our mouths.

Humans are born without bacteria, and acquire most of the microbiome by the age of 3.

Babies acquire their first dose of bacteria as they pass through their mother’s birth canal.

Dried fruits and raisins have greater chance of causing tooth decay than chocolates because they stay on teeth longer; feeding the bacteria that causes tooth decay.