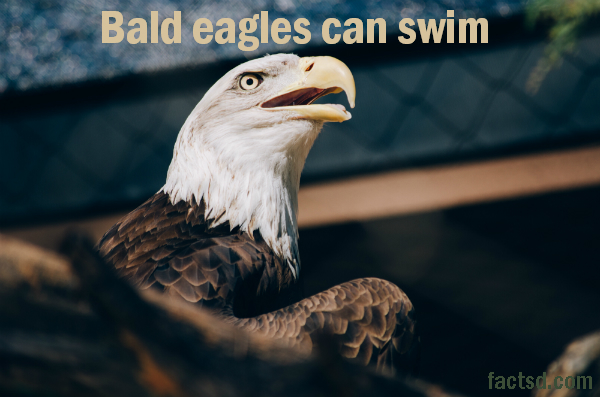 Bald eagle facts: Interesting facts about bald eagles. Bald eagle which is native to North America is also a national bird of the United States. It is found in Canada, United States and Mexico.  Bald eagles were once listed as endangered species but its population has rebounded and today it is thriving in many places of North America. Bald eagle is a sea eagle, which means that their primary food source is fish. Let’s explore more facts about bald eagles.

Females are larger than males, and weight 25% more than males.

Bald eagle return to the same nesting site each year, adding new materials to the nest.

Both the male and the female work together to build the nest of sticks, on top of the tree during the breeding season.

Eagles don’t sweat so they need different cooling methods such as panting, perching in the shade and holding their wings away from their body.

Bald eagles skeleton forms only 5 to 6% of their body weight because they have hollow bones.

Bald eagles are solitary animals. They migrate and spend their winters alone.

Bald eagle cannot smell, but they can taste.

Bald eagles don’t have vocal cords but they use sounds to communicate by pushing air through the bones in their necks.

The young birds grow rapidly, adding one pound to their body weight every four or five days. At 6 weeks, they become as large as their parents.