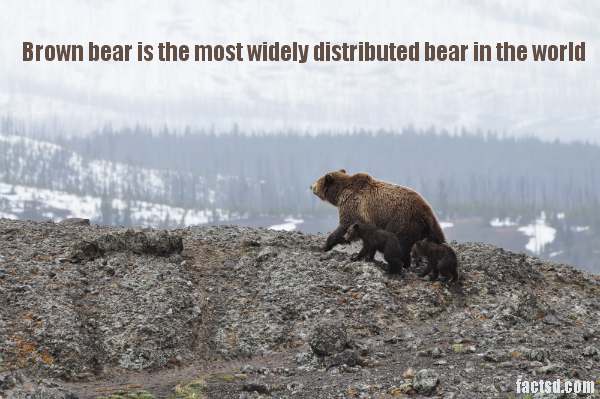 Bear facts: Amazing facts about bears. Bears, the ferocious looking animal are the largest predators on Earth. Though they look fierce and aggressive but in facts they are quite frightened of humans.  Bear have huge bodies that make them appear sluggish but they are excellent at running, climbing and swimming. They are generally solitary animals but the females take took care of their cubs. There are currently eight living species of bear, the most popular ones are the brown bear, polar bear, American black bear, giant panda, sloth bear, sun bear. The other popular subspecies is grizzly bear. Here are few interesting facts about bears

Bears grieve deeply for their family members. Cubs moan and cry when they are parted from their mothers. This can go for weeks if their mothers are killed by hunters.

We can determine the age of the bear by counting the rings in a cross section of its tooth under a microscope.

Delayed implantation is an adaption of polar bears that ensure cubs will be born to healthy mothers at a time when chances for survival are greatest.

Bears have two layers of fur. The short layer keeps the bear warm while the long one keeps water away from the skin and short fur.

Bears lips are not attached to their gums, which make them look rubbery.

Female bears give birth during the hibernation, and are roused when doing so.

Brown female bears lose 40 percent of its body weight while giving birth and nursing a litter during winter months.

All bears except pandas walk by putting their feet flat on the ground. This kind of walking is called “plantigrade.” However, other animals like dogs, horses and elephants walk on their toes.

Smell is the principle sense used by bears to find most of their food.

While most bears have bare feet, polar bears have fur on the bottoms of their paws and between the toes.