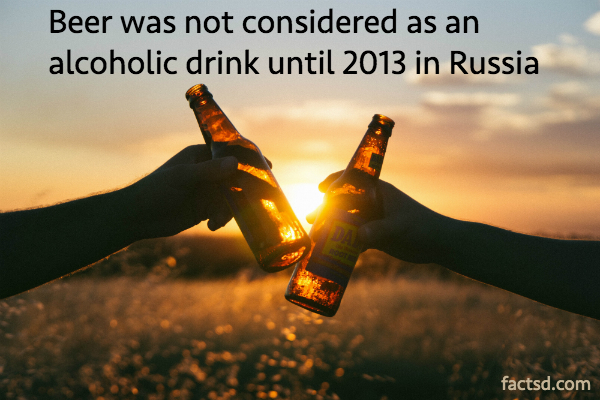 Beer facts – Interesting facts about beer. After water and tea, beer is the most popular drink worldwide and is also the most widely consumed alcoholic beverage around the world. The popularity of beer transcends national boundaries and cultures. It is consumed by gallons in America and an average American is estimated to drink 23 gallons of the beverage every year.

It is estimated that at any given moment 0.7% of the world is in an inebriated condition. That translates into 50 million drunk right now.

The darker and bitterer the taste of beer is, greater will be its alcohol content.

Beer was not designated as an alcoholic drink until 2013 in Russia.

Beer happens to be one of the oldest alcoholic beverages and is said to have been invented in the Neolithic era i.e. 9500 BC.

In 1814, streets of London were flush with 400000 gallons of beer after a huge vat ruptured in the parish of St. Giles.

Banana beer is an alcoholic beverage which is prepared from mashed bananas along with Sorghum, millet or maize flour which are added as a source of yeast. The beverage is known in Kenya as urwaga, in Democratic Republic of Congo as Kasiksi, in Uganda as mubisi, in Rwanda and Burundi as urwagwa. The beverage is consumed in sacrament and rituals in the African sub continent.

A group of Buddhist Monks in Thailand, fed up with ever increasing mountain of litter, composed mostly of Beer cans in the Sisaket area near Cambodia,  began an epic game of “100 bottles of beer on the wall.”

The construction still continues and now features a crematorium, water towers, sleeping quarters and even toilets.

Argentina is famous for its dictators and figures like General Juan Domingo Peron. It is also the birthplace of many left wing guerilla uprisings and beer makers were quick to capitalize on this culture, brewing and selling artisan brands that celebrate the country’s political icons.