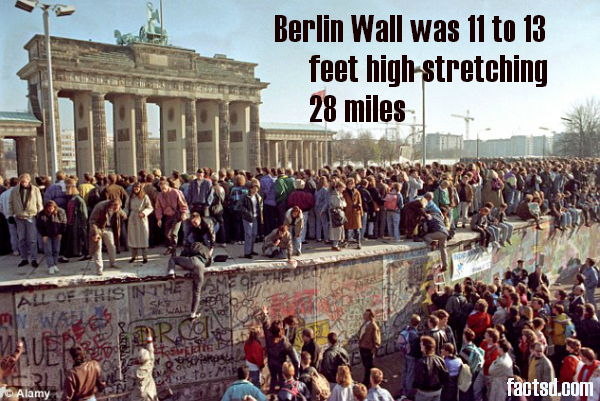 Berlin Wall facts: Interesting facts about Berlin Wall. Berlin Wall is one of the greatest symbols of the Cold War. The wall erected in 1961 separated the West Berlin from the communist controlled East Germany and East Berlin. The Berlin Wall was demolished in 1987 which led to the unification of Germany forming the Federal Republic of Germany. Germany has now become an economic leader in Europe and also a world leader in providing clean energy.

Only the west side of the Berlin Wall was covered in graffiti.

The Berlin Wall is a symbol of Iron Curtain that divided Europe between democracy and communism.

Another interesting Berlin wall facts is that the demolition of the Berlin Wall began on 13 June 1990 and was completed in 1992.

East Germany has lost one-sixth of its population before the Berlin Wall was erected in 1961.

The GDR officially referred the Berlin Wall as the “Anti-Fascist Protection Wall”.

It is ironic that the Wall was built to keep the citizens from leaving and 28 years later the wall is demolished to serve the same purpose.

The Berlin Wall is not a single wall but it is actually two concrete barriers with a 160 yard wide “death strip” in between the barriers.

While the economy of the West Germany was growing, East Germany’s economy suffered. Many people were leaving the country, the East was about to lose its workforce, and hence to stop this trend Berlin Wall was built.

The second wall of the Berlin wall was added in 1962, about 160 yards behind the original wall.

After World War II, Germany was divided into four zones, each occupied by one of the four allied powers that defeated the Nazis.