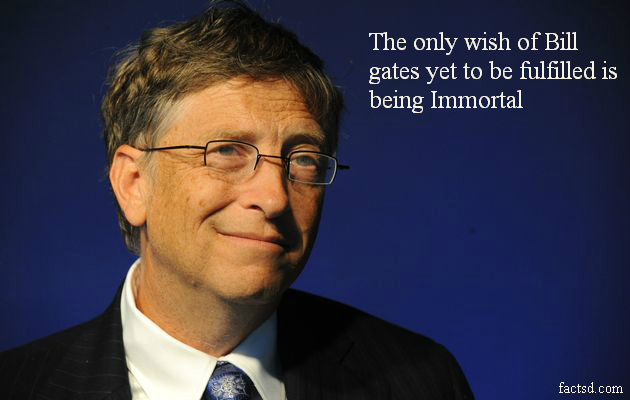 Bill Gates facts: Interesting facts about Bill Gates. William Henry Gates III is the birth name of Bill Gates, who created a revolution in computer science engineering and information technology. Bill gates Entrepreneurship in personal computer revolutionized the world.  He is the founder of the world’s largest PC software company Microsoft. Apart from being the world’s richest man, there is lot more to know about his magnificence. He is the legend for software pioneer, business tycoon and warm philanthropist. Time magazine named him one of the most influenced and recognized person on the globe. It also awarded Bill & Melinda Gates persons of the year in 2005 for their Humanitarian efforts. He is considered as the warm philanthropist for his myriad donations made to charitable organizations and scientific research centers. Every Donation goes through the Bill & Melinda Foundation, founded in 2000. Explore amazing facts about Bill Gates.

Bill Gates goal was to become a Millionaire before reaching 30 but instead he became a Billionaire at the age of 31.

If Bill Gates owns a country, it would be 64th richest country in the world.

Bill Gates children gets only $10 million out of his 72 billion net worth.

In 1977, Bill gates was arrested for driving without license and skipping the red light signal.

Bill Gates thought in 2004 that the problem of spam emails will be eradicated within 2 years.

Even after his net worth is 36 Billion US$, Bill Gates still continues to Fly coach until 1997.

Till now Bill gates has donated 28 Billion US$ and it’s still running.