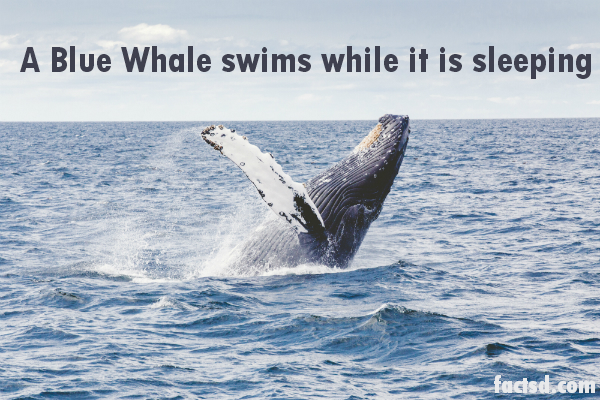 Blue Whale facts: Blue Whale is a gigantic species that are found in subtropical and polar waters worldwide. The Blue whales migrate two different times of the year. In summer months, the Blue whales are found in Arctic and the Antarctic regions. During the breeding sessions i.e. winter months, they move towards the warmer and less rich waters. The blue whales differ slightly in coloration and size, the difference is because of the oceans they live in and the food they take. The northern Blue whales and southern Blue whales never meet each other. The northern Blue whales habitat the rich waters of north Atlantic and North Pacific oceans. The southern Blue Whales tend to prefer warm waters of the southern Indian Ocean and South Pacific Ocean. During the whaling era the Blue whales population came down drastically but today they are no longer hunted and considered as the endangered species.

The esophagus of the blue whale is four inches (10cm) that makes it impossible to swallow large fishes.

Blue Whales have large mouth, so large that they can swallow a volume of water larger than themselves.

The female Blue whales are slightly larger than the males.

Blue Whales are considered as the fastest growing animal on our planet.

The Blue whales have a belly button and all born with it.

The female blue whales milk tastes like a mixture of fish, liver, milk of magnesia and castor oil.

Blue Whales method of catching food is called filter feeding i.e. gulping large amount of water with group of krill in it and filtering out the water to swallow only the krill.

The blue whale thrust the tails and slaps the surface of the water to indicate danger nearby.

Some of the Blue Whales experience sun burns and even tan.

The age of the Blue Whale can be identified by the number of rings present on its earwax.