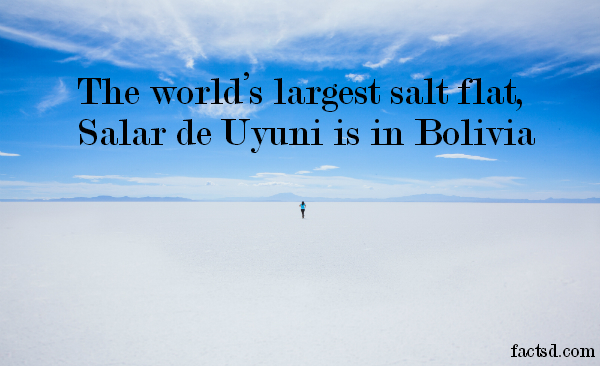 Bolivia Facts: Interesting facts about Bolivia. Bolivia is a landlocked country in South America. It was part of the Inca Empire and home to several indigenous tribes, before the arrival of Spanish explorers in the 1500s. Silver was the greatest revenue for the Spanish Empire. Bolivia became independent in 1825. Though it is rich in mineral and energy resources, Bolivia is one of the poorest countries of South America. It has the largest population of indigenous people, who make up two-thirds of the population.

Bolivians become eligible to vote at the age of 18 if they are married and at 21 if they are single.

There is no ban on public smoking in Bolivia.

Over 60% of Bolivians are indigenous, predominantly Quechua and Aymara.

Tourists at Bolivia chew cocoa leaves to fight the effects of altitude sickness.

There’s a clock on the National Congress building in the main square of La Paz that runs backwards, reminding its citizens to think differently.