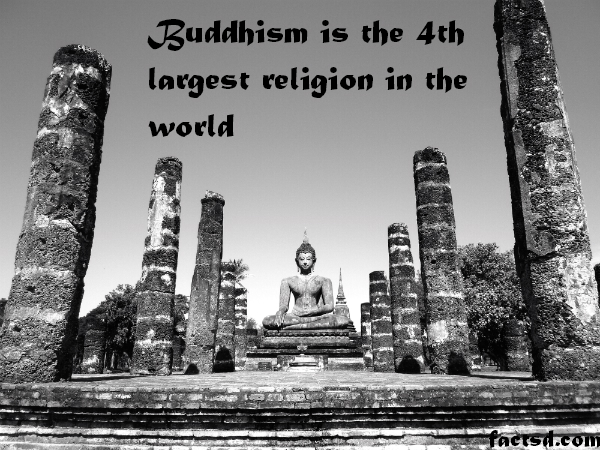 Buddhism facts: Interesting facts about Buddhism. Buddhism has its roots in India, where it began some 2,500 years ago and remains the dominant religion in the East. It is based on the teaching of Buddha. Buddhists believe that nothing is permanent and that change is always possible. Enlightenment can only be achieved through practice and by the development of morality, wisdom and meditation. Let’s explore interesting facts about Buddhism.

‘Bauddha Dharma’ or Buddhism means ‘Religion of Buddha’ or ‘Way of Buddha’.

In Buddhism, full moon is considered as sacred, especially the Buddha Poornima, the birthday of Buddha, also the day of his enlightenment (Nirvaana) and Death (Parinirvaana).

Flowers are food is generally placed before Buddha statues. Flowers remind the person that they will not live forever.

Nearly 0.7% of people in India are Buddhists.

Buddha’s final request to his followers was, “All component things in the world are changeable. They are not lasting. Work hard to gain your salvation.”

There are three religions or philosophies that have shaped the history of Ancient China. They are Taoism, Confucianism and Buddhism.

Buddhism is the 4th largest religion in the world.

Candles and incense sticks are lit during worship, as they symbolize light as in Knowledge.