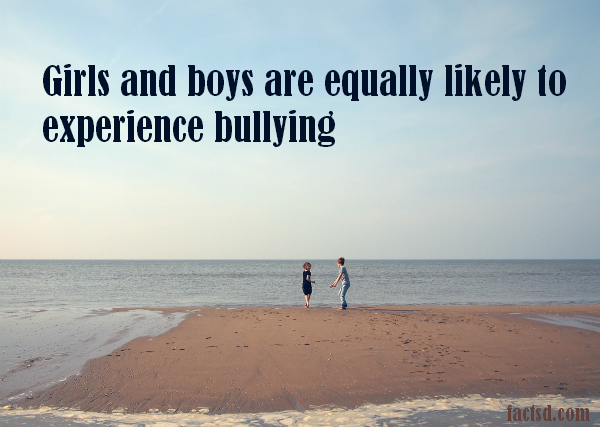 Bullying facts: Facts about Bullying. Bullying is harassing or being mean to another kid over and over again. Different types of bullying including cyberbullying, bullying in school, etc. Bullying is a growing problem among kids and teens. These kids are becoming regular victims of bullying, which not only damage their self-esteem but also leave long-lasting blemishes on their personality. Bullying is not restricted to a particular place or country, but it happens all over the world. Let’s explore astounding bullying facts and statistics.

Bullying, child abuse, and stress causes children to age faster at a cellular level and leads to mental and physical health problems even decades later, including premature death.

Only 58% of American schools have anti-bullying programs and policies.

Only 54% of teachers receive anti-bullying training.

Every year more than 3.2 million students are bullied.

More parents are allowing their children to undergo plastic surgery to tackle bullying.

Teachers intervene in only 1 in 25 bullying incidents.

71% of students report bullying as a problem in their school.

Bullying is a learned behavior and it can be changed.