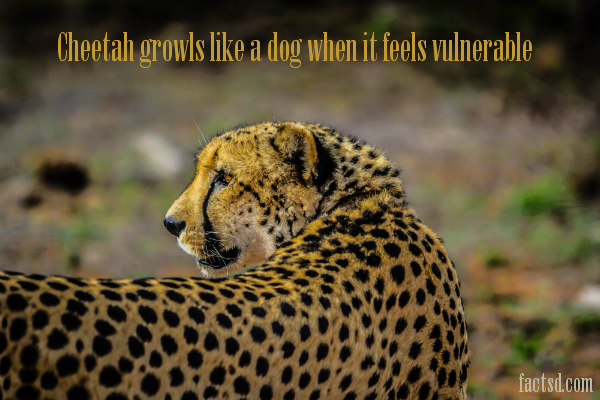 Cheetah facts: Interesting facts about Cheetah. Cheetah is the fastest animal living on land. It is smaller in size when compared to other big cat family. Cheetah is a carnivorous animal which belongs to Acinonyx genus species and it’s called as Acinonyx Jubatus in scientific terminology. They have a life span of 20 years but an average cheetah lives around 17 to 18 years. At the end of 19th century they are 100,000 cheetahs living on earth but today only 9,000 to 12,000 cheetahs are left all around the world. Mostly they can be found in sub-Saharan Africa, Iran, Africa, Asia and some parts of Middle East. Cheetahs are the outcome of 5 generation genetic diversity  and this might be the last genetic mutation. During the mammal reduction around 10,000 years ago, this species survived knowing the fact that it has a very low birth rate when kept in captivity. Let’s learn interesting facts about cheetah.

Male Cheetah has a bigger head and looks larger in size when compared to female cheetah.

The bonding between male and female cheetah starts with grooming.

Cheetah growls like a dog when it feels vulnerable.

Cheetah cubs have a grayish thick layer fur on the back which makes them warm and covers has camouflage.

When Cheetah turns to 14 or 16 months and began hunting, it is then they leave their family.

African black magicians and healers use bones of Cheetah foot in performing rituals to show they speed and strength.

It’s a common exercise for African farmers to keep trap cages for cheetahs.

A cheetah cub learns to hunt by running down and sliding on backs of the fellow cubs.

Cheetah cubs always try to catch the small flying birds which are useful for the pouncing skills improvement.