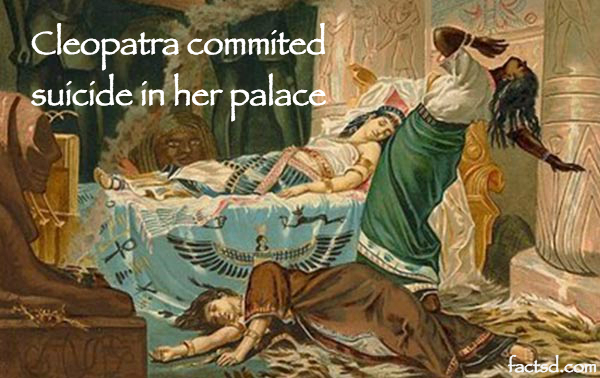 Cleopatra facts: Interesting facts about Cleopatra. The Greek historian, Plutarch, chronicled the events about a century after Cleopatra’s death, was skeptical about her unequaled physical qualities. He felt that she was not unparalleled in her beauty. However, he does credit her with an “alluring charm” intellectual and talented. Cleopatra had a knack of letting people feel that they were the focus of her attention – and that quality, rather than her beauty, was her winning trait with Caesar and Antony. Let’s explore more facts about Cleopatra.

Fable says that if Egyptian queen Cleopatra’s nose was an inch shorter the world’s history would have been different, a affirmation of her beauty which she used to her full advantage for the betterment of her kingdom.

On August 12, 30 B.C., the beautiful queen committed suicide inside her palatial palace.

During her 20 years as a ruler of Egypt she successfully outwitted her opponents using her beauty in ruthless power struggles with her kin, battled Roman emperors, and made military alliances and fanatical affairs—with Julius Caesar and Mark Antony.

Strange but it is true, Cleopatra was not Egyptian and her lineage originated from Macedonian Greece and Ptolemy I Soter, one of Alexander the Great’s generals.

Alexander had appointed caretakers to govern his huge empire which stretched from Greece to western India.

Ptolemy I Soter was appointed to look after Egypt after Alexander’s death. He launched a dynasty of Greek speaking rulers and it lasted for three centuries.

Cleopatra was not an Egyptian but she embraced Egyptian culture and also learned the Egyptian language.

Not much is known about her mother, Cleopatra V Tryphaena, the king’s wife who could be his half sister also. After the Death of Auletes, the Egyptian throne passed to 18-year-old Cleopatra and her 10-year-old brother, Ptolemy XIII.

The members of the Ptolemaic dynasty married within their family for purity of their lineage and Cleopatra also married booth her adolescent brothers and they served as ceremonial husband and regents at different times in their reign.