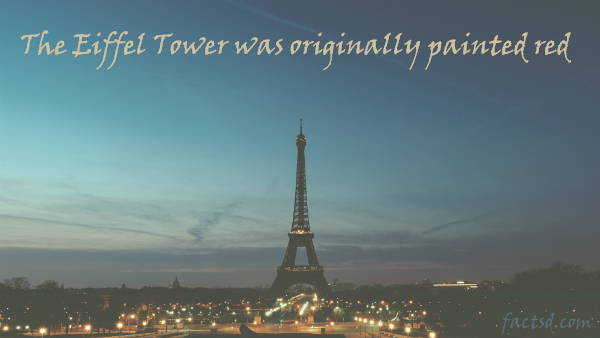 Eiffel Tower Facts: Paris, the city of love has some wonderful and incredible monuments and building, one such grandeur architectural structure is the Eiffel Tower. It is considered to be the epitome of romance, magnificent and flawless beauty. Eiffel Tower is the symbol of Paris and not only Paris but France  as well. Paris is one of the famous destination in Europe, and no wonder, it is the Eiffel Tower which amazes and mesmerizes many. Eiffel Tower was once the tallest architectural structure but this hasn’t affected its reputation in any way, the lights, its amazing structure draws millions towards it. It is completely made of iron, it’s marvelous structure is astounding and makes people fall in love with it and so much that a women got married to it. Lets check out some astounding facts about Eiffel Tower.

The Eiffel Tower is not painted in one uniform color. This is to counteract atmospheric perspective; the tower is painted dark at the top and gradually lightens towards the bottom.

Eiffel Tower was originally built as the entrance arch for the World’s Fair, an exhibition in 1889, to mark the 100 year anniversary of the French Revolution.

It is illegal to take photograph of the tower at night because the light display is considered artwork and protected under copyright law.

A lightning strike in 1902 has damaged the upper section of the Eiffel Tower, requiring the reconstruction of its top.

When Gustave signed the contract only 25 percent of the finance was contributed by the Exposition Committee. They wanted Eiffel to pay the balance, which he agreed provided that he was given complete authority over the tower and its profits for twenty years.

Eiffel tower was not intended to be permanent. It was built for the 1889 Paris exposition and was temporary.

The Eiffel tower was going to be demolished in 1909, but later saved to use it as a giant radio antenna.

During WW2, when Hitler visited Paris, the French cut the lift cables on the Eiffel Tower so that Hitler would have to climb the steps if he wanted t o reach the top.

Citroen, the French car manufacturer used the tower as a giant billboard between 1925 and 1934. The company’s name was emblazoned on the tower using a quarter of a million light bulbs. This holds the record in Guinness Book of records for the world’s largest advertisement.