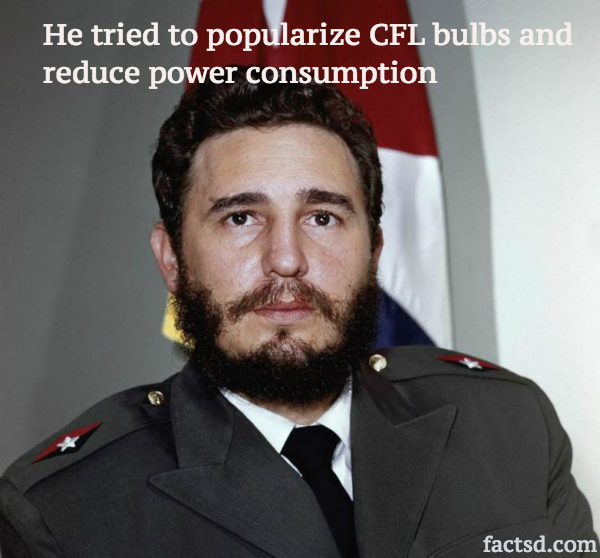 Fidel Castro Facts: Facts about Fidel Castro. Fidel Castro was a well known international figure and he was a symbol of socialism which has been largely delegated to history with the demise of Soviet Union and the world economy becoming more open and capitalistic. Still his rule was never shadowed by any allegation of corruption though many skeptics view his reign as a period which saw human-rights abuses, the exodus of a large number of Cubans, and the impoverishment of the country’s economy. Whether you view him as a hero or villain, you cannot ignore him.

Fidel Castro is the third longest serving head of the state after the Queen of Britain and the King of Thailand. Illness forced him to hand over power to his younger brother.

He survived more than 634 attempts on his life, mainly plotted by CIA. This included some attempts which were bizarre including poison pills, toxic cigar, exploding mollusks, and a plot to make his beard fall off to lower his popularity.

He taciturn and hard worker and often worked late into the night and going to bed at 3 to 4 a.m. He hosted foreign guests in the early hours of morning knowing that they will be tired and he will have an upper hand in negotiations.

He was deeply inspired by Earnest Hemingway’s writings and the author had a permanent residence in Cuba. The masterpiece “For whom the bell tolls” was written by him in Cuba. The two had met in 1960 at a fishing competition in Cuba.

He was imprisoned for two years and in 1955 travelled to Mexico forming the the 26th of July Movement, with his brother Raúl Castro and Che Guevara, a controversial Argentine Marxist revolutionary, guerrilla leader, diplomat, and military theorist.

He did not have much liking for music but was an avid sports fan and kept undertaking physical exercises to be fit.

He kept his private life under wraps and not much is known but the Cuban dictator is rumored to have five wives and eleven children from his different liaisons with the opposite sex.

His full name was Fidel Alejandro Castro Ruz after his father Ángel Castro y Argiz who was a Spanish immigrant. Ruz, his second name was given by his mother Lina Ruz González, a daughter of Canarian immigrants.