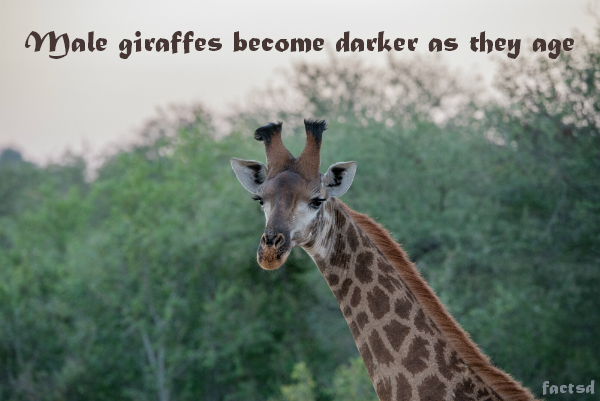 Giraffes are the tallest animals in the world. They not only exhibit impeccable features but are astounding and adorable creatures one can ever witness. Its long stature, beautiful long legs not only make them admirable but its bearings as one of the most peaceful animals has impressed many. Giraffe though is not included in the endangered species list, but habitat loss, poaching are posing dangers to the population in future. Giraffes are one of the animals which spend most of the time standing, they rarely sit and many activities like eating, sleeping and giving birth are performed while standing. Giraffes are native to Africa and are herbivorous animals i.e. they feed only on plants. Lets did into some amazing facts about giraffe.

Giraffe have thick and sticky saliva that protects it from the thorny branches of the acacia tree.

Giraffe stinks. Their long neck does little help in grooming, so they secrete chemicals from skin and coat to repel bacteria and disinfect the skin to prevent fungi and bacteria growth and this chemical is unpleasant to smell.

Giraffes are picky eaters; they only choose the most nutritious leaves.

Giraffe can adapt their diet depending on the plant or tree species available in each region.

Giraffe Manor is a hotel in Kenya that’s also a giraffe sanctuary. You can hang out with giraffes all day and feed them from your window.

Male giraffes have a stronger odor than the females.

Giraffes tongue is purplish black in color which protects against sunburn.

Giraffes often walk with birds on their back. These birds are called tick birds, they eat bugs that live in the giraffes coat and alert the animals to danger by chirping loudly.

You never hear noise around giraffes. Because they communicate using noises that are too low for humans to hear.