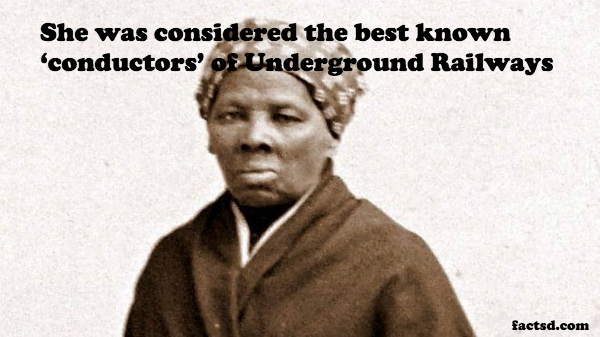 Harriet Tubman Facts : Interesting facts about Harriet Tubman. Today when freedom and democracy is a foregone conclusion it is almost impossible to imagine the conditions of America in the late eighteenth century but for Harriet Tubman who became a symbol of resistance, freedom and justice which was to become the underlying principle of US Government.

Born as Araminta Ross, she will adopt the name “Harriet” in memory of her mom Harriett Ross.

Her actual birthday is unknown but it is believed that she was born somewhere between 1819 and 1823. Her mother lovingly called her “Minty”. Her maternal grandmother named Modesty arrived on a slave ship from Africa. Beyond that there is no more information about her ancestors.

She had eight brothers and sisters.

The name Tubman was from her first marriage with John Tubman who she married in 1844.

Born as a slave she was raised in Maryland’s Eastern Shore. Families in these areas included both free and enslaved members.

Harriet’s husband was a free man and her status did not change till she fled to Pennsylvania which is a free state.

Her husband later remarried and did not follow Harriet.

She would return countless times to Maryland to rescue her brethren from the clutches of slavery and even earned a nickname “Moses” like the famed Moses who led his Jews brethren to freedom from Egyptian slavery.

She was always under threat and slave owners had even placed a bounty on her head. The Fugitive Slave Act entails severe punishment to those who help slaves to escape hung like a sword on her head

Headstrong and independent, she was an active supporter of woman suffrage and was very close to prominent women like Susan B Anthony.