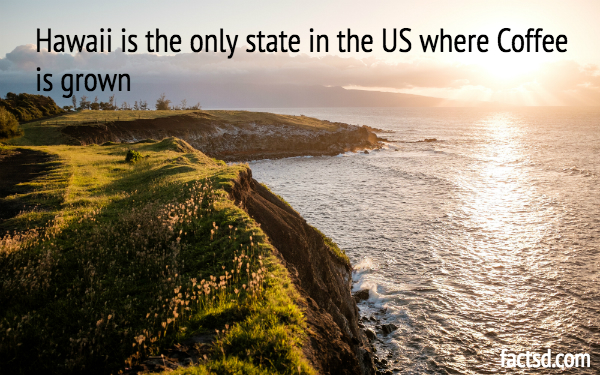 Hawaii Facts: Interesting facts about Hawaii. Hawaii is the only U.S. state located in Oceania and the only one composed entirely of islands. It is also the only state which is not situated in the North America Continent.

The genesis of the word Hawaii is from the Polynesian Hawaii, meaning ‘place of the gods’ or ‘homeland’.

Aloha is one of the most commonly used word in Hawaii and therefore the state is also known by the name Aloha. Aloha means hello or welcome or best wishes based upon which context it is used.

It is the only state in the US which is entirely made up of islands. It is composed of more than 132 islands, eight big islands and 132 small islets, reefs and shoals

The state is the most isolated place in the world with mainland America, California almost 2390 miles away.

Iolani Palace is the only royal palace in the United States. It had electric illumination four years earlier than White House in Washington DC.

Hawaii is the only state that grows coffee and more than one third of commercial supply of pineapples comes from Hawaii.

From East to west, it is the second widest state in the US after Alaska.

The islands have a predominantly tropical climate with tropical rain forest covering much of the islands along its windward cliffs and slopes and high-elevation plateaus.