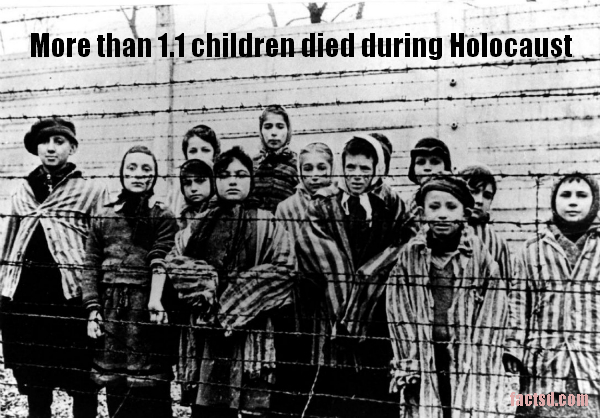 Holocaust began when Hitler came to power in January 1933 and ended on May 8, 1945 when Nazis were defeated by Allies.

Nazis have not only targeted Jews, but homosexuals, Gypsies, disabled were also persecuted. Anyone who resisted Nazi’s were either murdered or sent to forced labor.

11 million people were killed during the Holocaust and 6 million of them were Jews.

Denial of Holocaust either implicitly or explicitly is a crime in 17 countries including Germany, Canada, France, Israel etc.

“Arbeit macht frei” meaning “Work shall set you free” was used in many concentration camps.

Most Jewish victims of the Holocaust were women because women with children were either sent to gas chambers or medical experiments for contraception and fertility during which many died.

After 1933, concentration camps were set up to detain Jews, and others, while the extermination camps came up during the WW2.

The “Final Solution” program was constructed in 1942 in the Wannsee Conference, the program was to deport Jews to Poland where the SS would eventually kill them.

In the Warsaw ghetto in Poland was the largest ghetto and 1% of the population died every month.

It takes 20 minutes to kill everyone in the gas chambers.