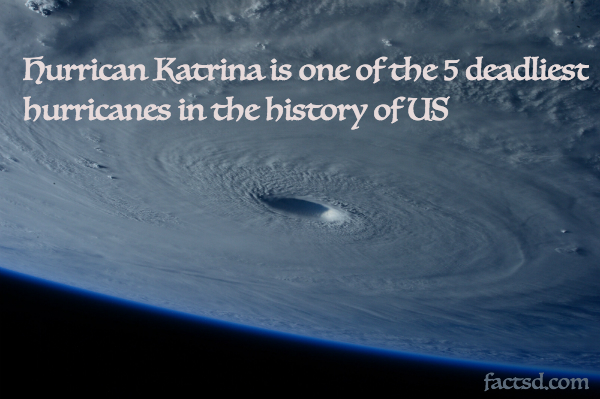 Hurricane Katrina was the largest and third strongest hurricane to cross US coast.

It was the fifth hurricane in the hurricane season of 2005.

The storm originated in the Bahamas on August 23 and was formed by the merger of a tropical wave and the remaining components of Tropical Depression 10.

The storm made over fifty breaches in the city’s surge protection system and was responsible for most of the deaths in the city.

1833 people lost their lives in the deadly hurricane.

Hurricane Katrina first crossed the US coast first in Florida but later gained strength when it entered the Gulf of Mexico to become a Category 5 storm.

The hurricane surge was as high as 20 feet (six meters) in some locations.

The levees of New Orleans were designed to cater to a Category 3 storms and could not cope with the ferocity of the Category 5 storm like Katrina.

The mayhem started on 23 August and peppered out on 31 August. In these seven days, the hurricane made landfall three times in Florida and Louisiana.

At one stage gusty winds at 175mph were recorded.