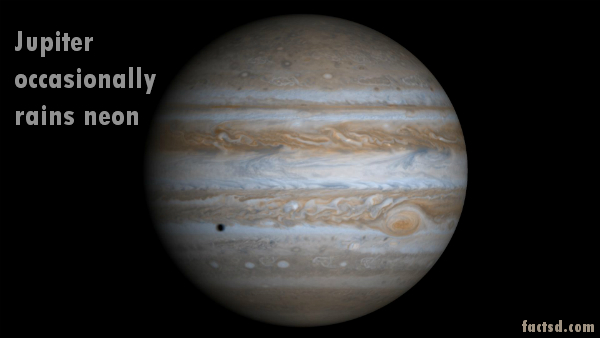 Jupiter facts: Interesting facts about Jupiter. Jupiter is one of the four gas giants, the other being Uranus, Saturn and Neptune. Jupiter is the fifth planet from the sun, it is the largest and the most massive planet in the solar system. Jupiter is remarkably colorful with white and dark bands of clouds. It is one of the interesting planet to study. Jupiter is also known as Jove. Juno a NASA space probe is orbiting the planet Jupiter after entering its orbit on July 4, 2016. Lets dig into other interesting facts about Jupiter.

Jupiter has no seasons like Earth. This is because the axis is only tilted by 3.13 degrees.

If Jupiter had been about 80 times more massive, it would have actually become a star instead of a planet.

Jupiter has east-west winds which travel up to 400 mph that swirl around the planet giving it bands and strips.

Jupiter’s thin, cold atmosphere becomes thicker and hotter as we go down, then it eventually turns into a thick, dark fog. In the blackness about 620 miles or 1,000 km down, the pressure squeezes the atmosphere so hard that it becomes liquid and ocean if formed.

Jupiter’s gravity has been used to catapult space-craft on deep space missions further away. This is how the 1975 Vouyager missions have managed to succeed.

Jupiter is the planet that has the most moons in the solar system.

Callisto, Jupiter’s moon, is the most heavily cratered body in the solar system.

Nasa believes the dust in the rings are a result of collision of two small moons.

Because Jupiter spins so rapidly that it bulges out at its equator.

Great Red Spot is red because the storm pulls up darker compounds from deep down the atmosphere. Once they are brought to the surface these compounds turn brown and red when exposed to sunlight.