He is one of the most successful recording artists of all time, Kanye West. Learn about his strange life and the little-known facts about him. Let’s get to know the man behind the hit songs “Stronger” and “Jesus Walks” on these surprising Kanye West facts! 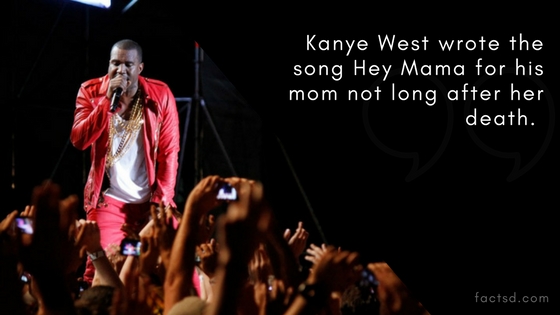 If you haven’t heard of Kanye West by now, some might call you fortunate, but most would just call you out of touch. Kanye West has been a cultural force for over a decade now and is arguably the most successful rapper of all time. Much of his fame, however, comes not from his musical career but his peerless ego and controversial actions.

Some call his gaffes the result of an unhinged narcissist while many see it as the expression of an artistic genius. Either way, Kanye West has captured the imagination of millions and has become a prolific recording artist, fashion designer, producer and pop culture icon. With a life so wild, it should come to no surprise that there are endless facts about the enigmatic and captivating West. Here are just a few Kanye West facts.

He Has a Song Called Facts

Interestingly enough, one of the surprising Kanye West facts is that he has a song called Facts! He released this single on New Year’s Eve 2015. Apparently not one to rest on his laurels, Kanye even works over the holidays.

His Career Was Almost Over Before It Began

Kanye almost never achieved his fame or anything else for that matter. He survived a near-fatal car crash in 2002 that left him in critical condition. He had to get reconstructive surgery on his jaw that thankfully went off without a hitch.

Ever the workhorse, Kanye continued to write music even when in the hospital, utilizing an electric drum kit. He wrote Through the Wire about his brush with death, and the rest is history. Had the crash gone differently though, history may never have remembered him.

In Swahili, an African language spoken in many countries Kanye means “the Only One.” Considering his famous and well-documented ego, his name couldn’t be better suited for him. A fitting name, or self-fulfilling prophecy? You decide.

His Mentor was No I.D.

Hip-hop and R&B artist and producer No I.D. (AKA Ernest Dion Wilson) mentored the young Kanye and taught him about recording and being in the business. So you have him to thank or blame for Kanye, depending on your opinion of him.

He Married a Kardashian but Almost Married Someone Else

It is more or less common knowledge now that Kanye West is married to Kim Kardashian; the woman who is famous for being famous. The pair has been married since 2014 and has two children together as well as a sex tape. They might be pop culture royalty now, but Kanye’s romantic future almost turned out very differently.

From 2006 to 2008, Kanye was engaged to fashion designer Alexis Phifer. He’s also had some high-profile girlfriends over the years including model Amber Rose.

Kanye Lived for Some Time in China

Kanye West was raised by his mother, Donda West, a professor. Her academic career led to China when Kanye was ten years old, and he followed her of course. He lived there for a year as his mother did her work. Travel does a lot to expand the mind, so it was doubtless a contributing factor to his artistic development.

One of the well known Kanye West facts is that he has been active in the music scene since 1996. However, before he ever had a number one record, he was producing songs for others and doing a very good job at it, too. He even did a lot of work for Jay-Z, producing several tracks on The Blueprint. He also produced tracks for rappers Mos Def, Talib Kweli and Ludacris, as well as singers Alicia Keys and Beyoncé.

Not content with simply producing music for others, Kanye wanted to make his own music. He begged labels and even the label he worked for, Roc-a-fella Records, to let him rap. No one believed in him, though, largely because he did not have much “street cred.” Jay-Z did not think someone with such a privileged upbringing could rap with the required passion.

Of course, they were all wrong. In an effort to retain him as a producer, Jay-Z signed him for a record deal, and from there it was success after success. Some would argue that he has even surpassed Jay-Z himself in success and popularity.

His Children Have Interesting Names

As you can probably guess, is an… interesting man like Kanye West is bound to give his children interesting names as well. It has become something of a celebrity tradition, to give your kids weird names to ensure that their life will never resemble normal, for better or worse.

One of his children is named North, making their full name North West. Hilarious. His other child is named Saint. Perhaps he believes if his child has an egotistical and self-important name, they will live up to it and succeed. And why not? It worked for him.

He Wrote a Song for His Mother When She Passed Away

Kanye’s Mother passed away in 2007 due to complications during plastic surgery. This understandably devastated Kanye, as she raised him more or less by herself. He wrote the song Hey Mama for her not long after her death. Like everyone else, not all Kanye West facts are happy or funny.

Kanye Has His Own Fashion Line

For an overachiever like Kanye West, two successful careers are not enough. So, he set out to make a third in the fashion world. His first outings into Paris fashion was met with confusion and little to no praise, but he didn’t give up.

He signed with Adidas a while later to start his own line. His fashion line, Yeezy, has been financially successful, if not critically acclaimed. Whether or not this success would have occurred without his already considerable fame is as unclear as it is irrelevant. Kanye has conquered the fashion world, what’s next?

He Met One of His Designers by Chance

Kanye was shopping in Barney’s one day when he spied a man with impeccable fashion sense. That man was Cassius Clay (not that one, a different one), a student at Yale. Kanye offered him a job on the spot working for his design brand. A true eccentric millionaire if ever there was one.

Kanye Dropped Out of College, Then Wrote a Song About It

Higher education did not impress Kanye West, so he dropped out. Where most would find failure after this, Kanye refocused on his music and as we all know achieved success. He even wrote songs about it on his album The College Dropout. This album was his first and propelled him to stardom.

He Grew Up in Chicago

While West spent some time in China, he was raised mostly in Chicago. He grew up middle class but was drawn to Chicago hip-hop. He also was influenced by rock and house music, the latter of which began in Chicago.

Kanye Has a Lot of Nicknames

Some of Kanye West’s nicknames are self-generated while others have been attributed to him. Either way, there are a lot of them. They include but are not limited to:

He Is a Big Fiona Apple Fan

Oddly, or perhaps predictably, Kanye has a lot of strange music tastes in comparison to the music he makes. He is a self-professed Fiona Apple fan, and even stated that he wanted to be the “Fiona Apple of Rap.” Perhaps he has achieved that, it’s hard to tell.

West’s Style is So Good, Michael Asked Him About It

While his fashion designing has not won him many awards, his fashion sense is still admired throughout the street fashion world. The King of Pop, Michael Jackson himself even called Kanye to ask him about a jacket he wore in the Stronger music video. One can only imagine the kind of things those two talked about.

While you know now that Kanye was a college dropout and named at least one album after that fact, his focus on his academic past does not stop there. On several of his album covers, a person in a bear outfit appears and was a consistent feature with all things Kanye for a while. The bear’s name is Dropout, either after the album or Kanye’s life choices. Either way, it’s one of the lesser known Kanye West facts and a good trivia question.

So, now that you are armed with these Kanye West facts go forth and spread his good word. Share this odd knowledge and let your friends know what a weirdly talented person he is. He would not object to people digging up his past and talking about his life choices. Indeed, he would probably be happy to know you were talking about his strange, successful and inimitable life.

Want to learn more surprising facts about your favorite celebrity?