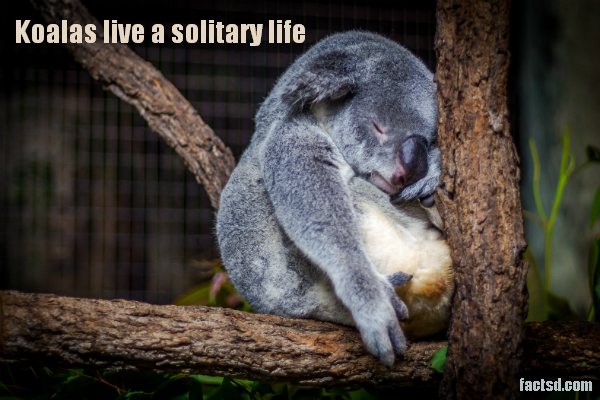 Koala facts: Interesting facts about Koala. Koalas are adorable creatures, and they are neither bears nor mammals but they are marsupials. Marsupials are the ones who give birth to underdeveloped and immature babies that are further developed in the pouch of the mothers. Koalas are native to Australia. Koalas are not active creatures and spend most of their life sleeping and feeding on eucalyptus leaves. They are not social active as well and associate with others only during the breeding period. Koalas have their territories, they only visit trees marked in their territory, and use scent glands for the marking purpose. Lets dig into some interesting facts about koalas.

Koala males are larger than females.

Koala’s fur is very coarse like wool, and it repels water to keep them dry in rain.

Koalas have poor eyesight, so they detect their predators by sound.

Even after a koala has died, other koalas usually won’t move into the vacant territory for a year, or until the scratches and scent marking of the old owner disappear.

Around 6 years of age, kolas chewing teeth begin to wear down and their chewing efficiency decreases. Eventually, the cusps disappear completely and the animal die of starvation.

Koalas feed on Eucalyptus leaves which are high in fiber and have low nutrient value.

Koalas can only absorb 25% of fiber eaten and hence need to eat large amounts if leaves.

As koalas survive on low nutrient diet, they conserve energy by moving slowly and sleeping.

Koalas smell strongly of eucalyptus and musk, this is believed to ward off fleas and other animals living in its fur.

Koalas climb backwards down the tree.