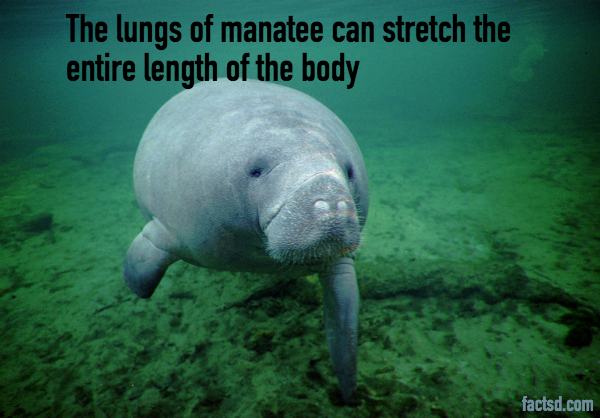 Manatee facts: 51 Interesting facts about Manatees. Manatees and dugongs are the reasons of many mermaid legends. Folklore tells how seafarers are lured by the songs of mermaids or sea nymphs and steer their ship towards treacherous rocks. However most of it is a product of imaginative brains and after a long sea voyage it is not impossible for a poor seaman too mistake a manatee for mermaid or sea nymphs.

Manatees are also referred as cows of the sea and are an endangered species with only 10000 manatees left in the wild.

The African manatees are found in the coastal waters and in the rivers of Western Africa.

The Amazon manatees are found in the Amazon River mouths in Brazil, Peru, Ecuador and Colombia.

They are very slow animals but great swimmers and can reach 20 mph.

Manatees are very playful and do body rolls as they play.

Manatee has only six vertebrae in its neck and therefore cannot turn their head sideways.

They can survive in both freshwater and saltwater.

Manatees graze on the sea bottom and can reach 13 feet in length and weigh 3500 pounds.