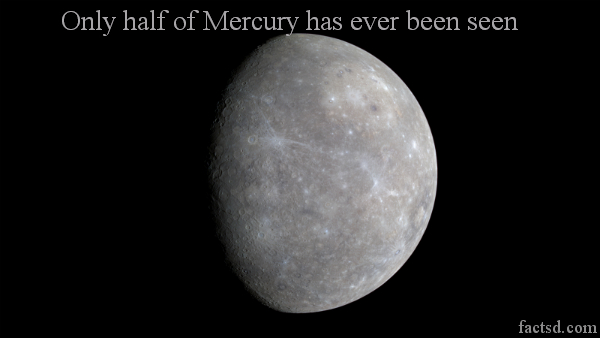 Mercury facts: Interesting facts about Mercury. Mercury is the closest planet to the sun in the solar system, and it is one of the five planets that can be seen with naked eye, the other being Venus, Mars, Jupiter and Saturn. Mercury is also the least explored planet due to its proximity to the sun; only two space craft’s have ever visited the planet Mercury till now. Mercury is now the smallest planet in the entire solar system as Pluto which was once the smallest planet has been reclassified as dwarf planet. Mercury is even smaller than the largest moon of Jupiter and Saturn. Talking about life, it is even hard to imagine existence of any life form on Mars given the harsh temperatures prevailing over the planet. Mercury is an interesting planet to explore, here are some interesting facts about Mercury.

Only half of Mercury has ever been seen.

As Mercury has thin atmosphere that is virtually non-existent, therefore its sky is black and stars can be seen during the day.

Mercury is the second hottest planet in the solar system, after Venus.

Mercury is the most cratered planet in the entire solar system.

Mercury is the only planet that doesn’t rotate exactly once a year.

Mercury is poor reflector of sunlight as its surface is consisting of dark, dry soil called regolith created by micrometeorite impacts.

Since Mercury is close to Sun, it is difficult to send spacecraft to explore the planet. The gravity of the sun constantly pulls the spacecraft causing the ship to need lots of fuel in order to stop or slow down at Mercury.

Mercury has no seasons, as it has small axial tilt.

The surface of Mercury facing the sun can experience temperatures of up to 427 degrees Celsius, while on the alternate side it can be as low as -173 degrees Celsius. This is due to lack of atmosphere.

Mercury is the second densest planet in the solar system, after Earth.