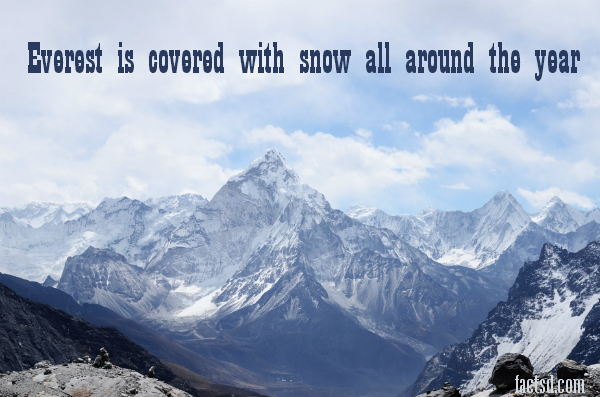 Mount Everest facts: Fun facts about Mount Everest. Mount Everest located in the Mahalangur mountain range in Nepal, is the highest mountain on Earth. It also forms the international border between China and Nepal. The mountains beauty is awe inspiring for millions of people thorough out the world. It is not only a beautiful sight which has visitors throughout the year but it also attracts climbers from all around the globe. Though it is one of the most dangerous and difficult mountain to climb, it hasn’t stopped anyone to reach the top of the summit. Every year it inspires many to reach the highest point on Earth and also breathe in fresh air at the summit. Did you know, Mount Everest is the youngest mountain on Earth? Let’s explore interesting facts about Mount Everest.

The current rate of success to climb Everest is just under 30 percent.

Descent from Mount Everest can be more dangerous than the ascent and normally takes 3 days.

The highest 848 meters of the mountain is known as “the death zone”.

Expedition to climb the mountain takes approximately two months from the start to end.

The Khumbu Ice fall is the most dangerous area on Mount Everest.

Climbers can suffer acute altitude sickness as well as frost bite and hypothermia.

Mount Everest summit temperature ranges between -4 F to – 35 F during summer, making the most favorable season to climb Everest.

A new law was enforced by the Nepalese government in 2014 stating that climbers must bring back 8 kg or 8 lb of waste on their descent or else lose $4,000 deposit.

It took 12 days for the Google team to capture images of Mount Everest for Google Maps.