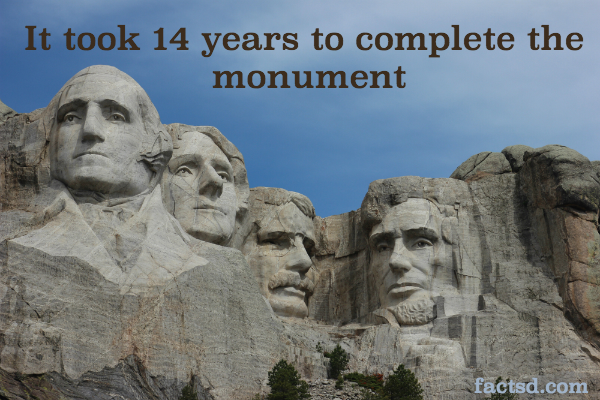 Mount Rushmore is the national monument, which was designed and worked out by Gutzon Borglum. Mount Rushmore National Memorial is carved into the side of the mountain called Mount Rushmore in Black Hills in South Dakota. It features four presidents of United States namely George Washington, Thomas Jefferson, Theodore Roosevelt and Abraham Lincoln, let’s explore more facts about Mount Rushmore.

1. The entire model and idea for making a sculpture with faces out of hills was the work of a historian Doane Robins. This was thought up in 1923, and the reason was so that he would be able to get tourists to visit South Dakota.

3. The incredible historian, Robinson, originally wanted to sculpt Western heroes such as the explorers Lewis and Clark. The idea for presidents developed over time.

4. Congress funded 85% of the cost of the project.

5. Once Robinson got close to creating this incredible thing we now know as Mount Rushmore, he had to get some help. this came in the form of Danish-American sculptor Gutzon Borglum. When he was called upon, he was working on a piece of art using stone in Georgia. According to him, the sculpture was not going well and it would not stand for a long time. He already knew this and was looking for a way to move out of that doomed project when his services were requested.

6. Borglum was 60 years old when be began working on the project.

7. Early on, it was requested that the monument have a national focus, dedication to American history of sorts.

10. President George Washington was decided upon because he was the founding father of the US.

12. Thomas Jefferson was used to represent the expansion of our nation. If you look into his history, you will see that he made this his main aim when he signed the Louisiana Purchase and authored the Declaration of Independence.

13. The men who worked on the mountain were miners who came looking for gold to the Black Hills.

14. Theodore Roosevelt was given this honor because he led the industrial development of the nation.

15. Abraham Lincoln was chosen to be on the monument because he guided the country through the Civil War and believed in protecting the nation at any cost.

17. It took 14 years to complete the entire project.

18. You can find the Presidential Trail close by the monument. This is a half mile walking trail that allows you to see each face close up and personal.

19. The mountain goats that live on the grounds of Mount Rushmore have come down the family line of a herd that was given to the State Park by Canada in 1924.

21. There are plenty of welcoming workers at the gates of Mount Rushmore to greet you. But if you were to go back to the mid to late 90’s, it was top service. The famous Ben Black Elk would stand at the front and personally greet visitors to Mount Rushmore.

22. The image was mapped onto the mountain using an intricate pointing machine designed by Borglum.

23. The president’s face is 60 feet wide in the sculpture.

24. Mount Rushmore lights up for two hours every night. If you visit, make sure to catch this!

25. The order in which the faces appear are George Washington, Thomas Jefferson, Theodore Roosevelt and Abraham Lincoln.

26. The team at Mount Rushmore is always trying to find innovative ways to help people enjoy this incredible monument while also preserving the earth. Knowing that illuminating the sky can harm the natural order, this team installed an LED lighting system 2015 to reduce the potential for consequences because of the daily lighting of Mount Rushmore.

27. The idea of carving the four presidents to attract national focus was the idea of Borglum and his son, Lincoln.

28. Mount Rushmore exhibits 60-foot sculptures of the heads of the Presidents.

29. The face of the president Jefferson was originally intended to be on the right of Washington.

30. After working for 2 years on the face of President Jefferson, the mountain was found to be inadequate and the somewhat finished face was eradicated from the mountain using dynamite.

31. It is estimated that it only took 6 years to make the actual carving. The reason the project ended up taking 8.5 years was because of bad weather and lack of funds.

1. Auguste Rodin, a French sculptors good friend Borglum, wanted to do something bigger than needles and carve a mountain.

2. Carving out the faces of the presidents was decided upon. The reason for this was their participation in the founding our great states, expanding the economy, preserving history and the law, and unifying the country.

3. Mount Rushmore is also known as the Presidents Mountain.

5. Each president’s head is tall as a 6-story building.

7. The four presidents’ are George Washington, who is the nation’s founding father.

9. Theodore Roosevelt who played a role in conservation and led to the industrial blossoming of the nation.

10. Abraham Lincoln was the man who preserved the nation and led the country through the Civil War.

11. There is a cave behind the Mountain that was going to be called the “Hall of Records” which is used to keep information about the monument and the history of presidents and America, but it was never finished.

1. Mount Rushmore is also known as the Presidents Mountain.

2. Each president’s head is tall as a 6-story building.

5. The four presidents’ are George Washington, who is the nation’s founding father.

7. Theodore Roosevelt who played a role in conservation and led to the industrial blossoming of the nation.

8. Abraham Lincoln was the man who preserved the nation and led the country through the Civil War.

9. There is a cave behind the Mountain that was going to be called the “Hall of Records” which is used to keep information about the monument and the history of presidents and America, but it was never finished.

1. The initial plan was to carve the figures from head to waist, but it couldn’t be implemented because of shortage of funds.

2. The Lakota people knew the mountain as the “Six Grandfathers”.

3. The mountain goes by many names such as Sugarloaf Mountain, Keystone Cliffs, Slaughterhouse Mountain.

4. Borglums hired one artist named Korczak Zilokowski, to work as an assistant, but after 19 days Lincoln Borglum and Ziolkowski ended in a heated argument and Ziolkowski left the project.

6. Charles E. Rushmore donated $5,000 towards sculpting the mountain that bore his name.

7. The Grand View Terrace is one of the best place to see the Mount Rushmore is just above the museum.

8. Mount Rushmore gets illuminated for 2 hours every night.

1. Mount Rushmore is made out of the material granite. This material erodes about 1 inch every 10,000 years.

2. There are a so many things being done to preserve Mount Rushmore. It includes installing 8,000 feet of copper wire in 1998 to monitor the hairline cracks.

4. Mount Rushmore is 1,745 m above sea level and this mountain was chosen because of its quality granite, location, because it faced southeast and enjoyed maximum sun that helped maximizing working hours.

5. After the sudden death of Borglum. Lincoln spent 7 months on the project and the project ended on October 31, 1941.

6. There are more than 7 chain hotels near Mount Rushmore.

7. Mount Rushmore is featured in many movies such as Team America: World Police, National Treasure: Book of Secrets, etc.

This incredible monument is truly a marvel to behold. There is so much history behind these presidential faces. Who knew a carved mountain could mean so much for an entire nation? As a cornerstone of this country, visiting this wonder is one of the coolest trips you can take, especially with kids! We hope this article has brought you deeper into this meaningful and historical masterpiece.