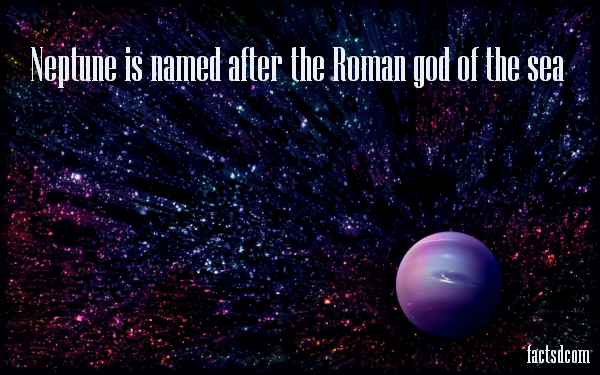 Neptune facts: Neptune, the gas giant was unknown to the ancient civilization as it is not visible by naked eye . It was first observed by two scientists in 1846. Very less is known about the planet as it is very far from the Earth; however the Voyager II and the Hubble Space Telescope has fed significant details about the structure, composition of Neptune. Unlike Earth which is a terrestrial planet, Neptune is a gas giant just like Saturn, Jupiter and Uranus and has no solid mass, but has gas as its surface. It experiences cold temperature given the fact that it’s far away from the Sun. It is the farthest planet in the Solar System, as Pluto which once was the farthest has been declared as a dwarf planet making Neptune the farthest. Let’s did into some interesting facts about Neptune.

Triton, Neptune’s moon is getting closer to Neptune, and eventually it will get so close that it will be torn apart by the sheer gravity of Neptune and it will form rings more spectacular than Saturn’s.

Summer in Neptune lasts for 40 years, but the temperature is -328 degree Fahrenheit.

Every 248 years, Pluto moves inside Neptune’s orbit for 20 years or so, during which it is closer to the sun than Neptune.

Triton is the most unusual moon because it orbits Neptune in the opposite direction of Neptune’s own rotation axis. Whereas ass the other moon in the solar system follow their planets round as they turn.

Triton is the only moon that is spherical, and the other 13 moons are irregularly shaped.

Neptune has an internal heat source, and radiates more than twice as much energy as it receives from the Sun.

Neptune was much closer to the Sun in the early solar system history but later migrated to its current position.

Neptune is the coldest planet in the solar system. The temperature can dip down to -366 degree Fahrenheit or -221.45 degrees Celsius.

The coldest temperature measured in the solar system (-230 degrees Celsius) have been recorded on Neptune’s moon, Triton.

Neptune is the only planet in the Solar System found by mathematical prediction rather than by empirical observation.