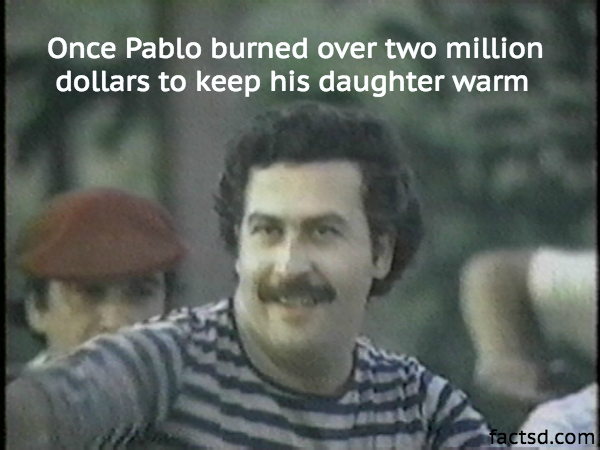 Pablo Escobar was the world’s most dangerous drug lord and in the 1980’s 80% of the cocaine smuggled into the US belonged to Escobar’s Medellin cartel.

Pablo had a profligate estate where he had built a zoo complete with giraffes, elephants, hippos and other animals.

Escobar has been indicted for more than 4000 killings which include more than 200 judges, over 1000 police personals, journalists, and government officials.

Before his entry into the drug trade, Escobar stole tombstones and sold it too smugglers. He also was into the business of stealing and selling stolen cars.

Escobar’s early brush with notoriety was the “Marlboro Wars,” in which he tried to control the smuggled cigarette market in Colombia. It was to become his training ground for future career in narcotic trade.

Pablo Escobar was born in Rionegro, Colombia in 1949 in a middle class family. His father was a farmer and mother was a school teacher.

In his teen years he aspired to become the President of Colombia, according to his near friends and family.

Escobar’s fortunes were enormous amounting to billions of dollars and while his family was in hiding, his daughter bought a Learjet top transport his wealth.

Escobar’s wealth was so big; he spent $2500 every month on rubber bands used to hold his money.