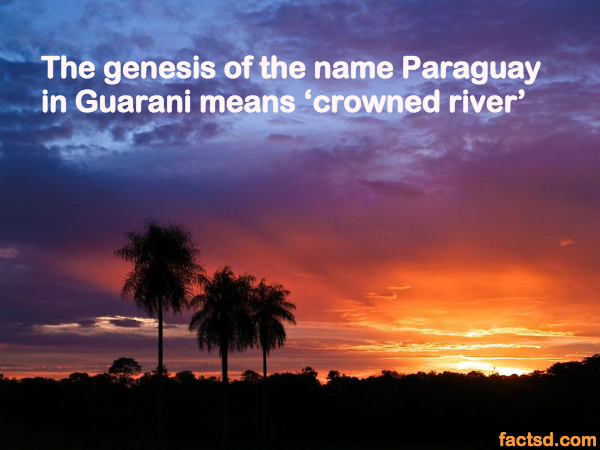 Interesting facts about Paraguay. Paraguay was once declared an uneventful country with huge disparity in wealth. It is slowly recovering from a series of dictatorial rules and slowly integrating itself to the global economy.

Paraguay is also known as the Heart of America or “Corazón de América” because of its location at the centre of the South America continent.

A popular interpretation of the word Paraguay is “river of the habitants of the sea.”

Most of the electricity produced in Paraguay comes from Itaipu Dam on the Parana River. It is close to the border with Brazil and is owned by both Paraguay and Brazil.

The country is bisected into two by the Paraguay River and is also the second largest river in South America after Amazon.

The literacy rate of Paraguay is higher than The United States with 94% literacy rate for citizens of 15 years and above as compared to 86% in the US.

J. O’Rourke once described Paraguay as “Nowhere and famous for nothing” but was so enamored by the country that he moved into the country.

More than 80% of the citizens of the country are mestizos or people with mixed Spanish and Native-American ancestry.

Long before the arrival of the Spanish in 1600s, the country was inhabited by Guarana people. Today 93% off the nation’s population is composed off mestizos, children of Spanish men and Guarana women making Paraguay’s population the most homogenous in South America.

It is one of the few South American nations which have retained its native language Guaraní as its first language.