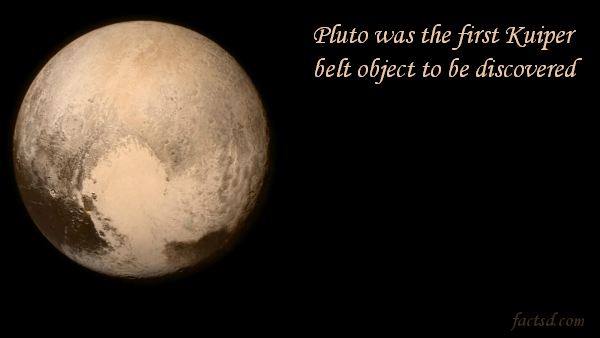 Pluto facts: Interesting facts about Pluto. Pluto which was once considered a planet is now reclassified as dwarf planet as it did not satisfy one of the criteria to include it into planets fold. In 2006, it is demoted to dwarf planet. Pluto is now the largest dwarf planet in the solar system, and the second massive after Eris. It has a reddish tint, and it officially known as 134340. Pluto cannot be seen with naked eyes as it is very far from Earth. It is having 5 moons. Let’s check out some interesting facts about Pluto.

Once a planet and now a dwarf planet, Pluto, was discovered on February 18th, 1930 by Clyde Tombaugh.

The sky on Pluto is so dark that it is possible to see stars during the day.

Pluto’s orbit is not on the same plane as the eight other planet’s orbits.

When Pluto is close to the Sun due to its elliptical orbit, its icy surface melts, rises and forms a thin layer of gaseous atmosphere comprised of methane, nitrogen and carbon monoxide.

Pluto was the first Kuiper belt object to be discovered.

Dwarf planets are smaller than the smallest planet in the Solar System, Mercury. There are 3 dwarf planets in our solar system. They are Pluto, Eris and Ceres.

Many astronomers believe that Pluto would have been classified as comet if it were closer to the sun.

Pluto is losing its atmosphere faster than previously believed.

There are dark spots on Pluto’s surface. What’s strange about these is their similar size and spacing.

Pluto has an axial tilt of 122.5 degree. Due to this it actually rotates on its side. This creates extreme variation in its seasons.

For 76 years Pluto was considered as planet until it was reclassified as dwarf planet.

Pluto is the only object in Kuiper Belt to have multiple moons.

Pluto is the only planet to be discovered in the twentieth century, even though it is no longer identified as a planet.

Pluto rotates from east to west like Uranus and Venus.

Methane and nitrogen form the atmospheric composition of Pluto.

It’s unknown whether Pluto exhibits magnetic field or not, but its small size and slow rotation suggest it has little to no such field.

Pluto is probably having a rocky core surrounded by mantle of water ice, with methane, carbon monoxide and nitrogen frost coating its surface.

Both Pluto and Charon orbit a point in space that lies between them, similar to the orbits of binary star systems, hence scientist refer them as double dwarf planet, or double planet or binary system.

Pluto’s orbit is eccentric and inclined.

Pluto while orbiting the sun is sometimes closer to the sun than Uranus and Neptune, this is due to its tilted orbit.

Despite Pluto’s orbit appearing to cross that if Neptune, the two objects orbits are aligned in such a way that they can never collide or even approach closely.

Charon takes the same time to rotate on its axis as Pluto does. Therefore Pluto’s moon never rises and sets like our moon and always has the same side facing Pluto.

Pluto has been visited by one spacecraft. On July 14th 2015, the New Horizons spacecraft flew by the planet and took a series of images and measurements.

A heart shape was discovered on the surface of Pluto.

When Pluto was considered a planet, it was the coldest of all the planets. The temperature on the planet ranges from -240 to -218 degree Celsius.

Pluto has a reddish tint.

On Pluto, the sun rises and sets about once a week.

It takes about 5 hours for sunlight to reach the sun.

Pluto takes the longest time of the eight planets to orbit the sun.

A person who weighs 100 lbs on Earth weighs the least on Pluto than any other Pluto, at 6.7 lbs on Pluto.

“Plutoid” is the tern used to describe objects in the solar system that are rounded and orbit the sun beyond Neptune’s orbit.

The orbit of Pluto is Chaotic and unpredictable. Scientists are able to predict the location of Pluto along its orbit for the next 10-20 million years, beyond that it is unknown.

Pluto has cliffs and craters.

Pluto has ice caps. The ice is frozen methane and nitrogen.

A radio signal moving at the speed of light takes about 4 hours to reach Pluto from Earth.

Pluto’s volume is much smaller than Earth, about 167 Pluto’s would fit into Earth.

Pluto is the second closest dwarf planet to the Sun.

Pluto is the largest dwarf planet but only second most massive, with Eris being the most massive.

Pluto is named after the Greek god of the underworld.

In 2006, Pluto was reclassifies from a planet to a dwarf planet.

Pluto is one third water, which is in the form of water ice, and the remaining two thirds are rock.

Pluto is smaller than a number of moons.

Disney’s Pluto the dog was named after Pluto.

Pluto lies in the Kuiper Belt, which is s disc-shaped zone beyond Neptune’s orbit and contains tiny icy objects.

Charon has a grayish tint.

Pluto’s surface is young and has ice mountain’s taller than the Rockies.

Pluto’s existence was not known to the ancient civilization.

Our moon is bigger than Pluto and ¼ the diameter of Earth.

Astronomers think Pluto looks a lot like Triton, Neptune’s moon. They have some similarities like frozen volatiles, faint nitrogen atmosphere and similar composition of rock and ice.

Scientists believe that Charon was created after a large object smashed into Pluto billions of years ago. This resulted in chain of debris which eventually coalesced into Charon. The other moons have exact resonances with Charon, suggesting that they also formed from the debris.

For 20 years Pluto orbit is closer to the Sun than Neptune.

Charon is named after the mythological boatman who ferried souls across the Styx river to Pluto for judgment.

Clyde Tombaugh’s ashes were placed on the New Horizon space craft, which flew past the dwarf planet.

Pluto has not cleared its neighborhood, one of the conditions to classify an object as planet.

Pluto hasn’t orbited once around the sun since its discovery in the year 1930.

Some astronomers believe that Pluto was once a moon of Neptune that has somehow escaped into its own orbit.