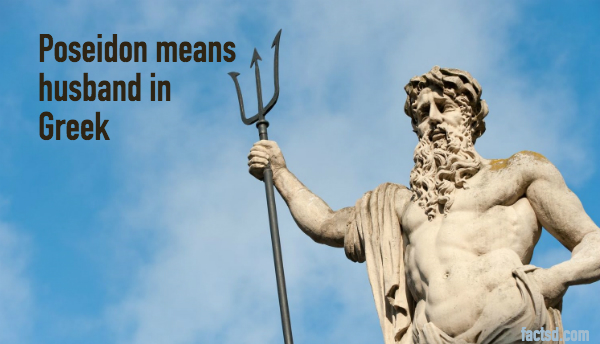 Poseidon facts: 46 Interesting facts about Poseidon. Poseidon, the god of the sea and the protector of oceans, is a character who is noble but has shades of grey also. He is the brother of Zeus and Hades, and has a major say in the running of the world. He keeps the tempestuous oceans under control and is worshipped by seamen asking him to ensure a safe voyage to their ships.

Poseidon is also known as the God of Sea and is considered one of the most violent and ill tempered and greedy Olympian God.

He was born to Cronus and Rhea and was swallowed by his father along with Hades, Hestia and Hera. However in another version of the story says that Poseidon like Zeus was saved by his mother who concealed him among a flock of sheep and feigned to have given birth to a colt which was eaten up by Cronus.

In yet another myth nurse of Poseidon, Arne denied knowing where he was when Cronus came searching and later Poseidon was raised by the Telchines on Rhodes

When the Titans were finally defeated by the Gods and the spoils of the war was being shared between the three Gods-Zeus controlled the sky, Hades the underworld and Poseidon the sea.

Seafarers relied upon Poseidon for a safe and productive voyage.

Poseidon was bestowed upon the sea dominion after the fall off Titan.

He has two brothers Zeus and Hades, each master of their realms.

He is worshiped as a God pertaining to sea and navigation.

He is also considered as a fertility God.