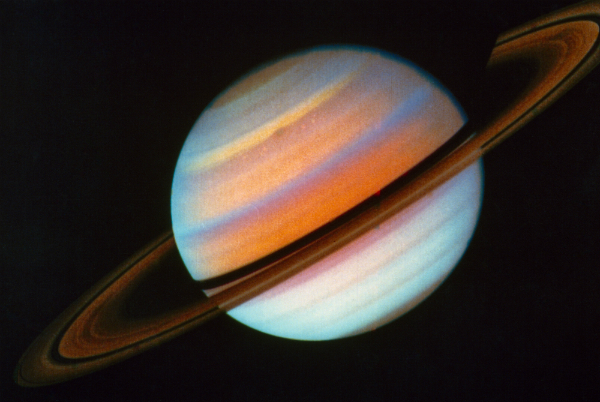 Saturn facts: Fun and interesting facts about Saturn. Saturn is the second largest planet in the Solar  System. Astronomers consider Saturn as the most beautiful planet due to its amazing rings which exemplifies its look. Saturn is the farthest planet in the solar system and it can be seen with naked eye. It is one of the gas giants and shares huge similarity with Jupiter. Saturn has 7 beautiful rings made of countless pieces of icy rocks. Here are few interesting facts about Saturn which make you love the planet even more.

Saturn is the sixth planet from the Sun, and it is the most distant planet.

Saturn is the fifth brightest object in the Solar System and can be seen with naked eye.

Saturn gives more energy than it receives from the Sun. The heat is generated from the gravitational compression of the planet and the friction from large amount of helium form the atmosphere.

Saturn has the fastest winds of any other planet in our Solar System. The winds are measured to be 1800 km per hour.

Saturn is the least dense planet in the Solar System.

Saturn’s moon Titan is the second largest planet in the solar system, next to Jupiter’s moon Ganymede.

Saturn appears as pale yellow color because its upper atmosphere is largely made of ammonia crystals.

The origin of Saturn’s rings is not fully understood. It is possible that rings have been around since 4.54 billion years ago or perhaps they’re relatively new compared to the age of Saturn.

Saturn’s ring sometimes disappears, they don’t actually disappear but they look like they’re going away.

Saturn is not perfectly round like most of the other planets in the solar system. Saturn is wider in the middle and narrow near the top and bottom.