10 Shakespeare Facts About His Life & Writings

While much of William Shakespeare’s personal life is shrouded in mystery, what we do know is downright tantalizing. Did Shakespeare hate his wife, Anne Hathaway? Did he write his most famous plays--or did he simply take credit for them? And what was he doing for his seven “lost” years?

Quick Navigation
1. Shakespeare’s Parents Couldn’t Read or Write (and neither could his children)
2. William Might Not Have Loved His Wife
3. Shakespeare Was the Original Viral Meme
4. The Bard Knew How to Use Failure
5. We Owe Much to Shakespeare’s Friends
6. Whatever You Do, Don’t Disturb His Grave
7. Shakespeare Might Have Been an Early Feminist
8. He Brought Back the Gold Hoop
9. Maybe Not the Birds Next Time
10. “taH pagh taHbe”

1. Shakespeare’s Parents Couldn’t Read or Write (and neither could his children)

William was one of many children born to John and Mary Shakespeare in a little town in the English countryside called Stratford-upon-Avon. In the 1500s, it was common for provincial commoners like the Shakespeares to be illiterate, and most believe that was the case for John and Mary.

William, however, attended the local grammar school, though his three children never learned to read or write (most believe his wife, Anne Hathaway, was also illiterate).

These illiteracy roots make Shakespeare’s works even more shocking, considering the tremendous command of language and extremely wide vocabulary they encompass. In fact, it’s part of why there are so many theories suggesting William isn’t the author of his works--but more on that later!

We know--a loveless marriage isn’t, itself, particularly shocking, but when you consider that this particular marriage belonged to one of the great romance writers of our time, it becomes rather disconcerting.

It seems, however, that Anne Hathaway, a woman eight years Shakespeare’s senior, was pregnant when the two wed. Historians believe this to be so both because their first daughter was born only six months after their wedding and because their wedding was only announced in church once, as opposed to three times.

When you combine this with the fact that Shakespeare spent a large amount of time living away from home, was known to have several affairs during his lifetime, and left almost nothing in his will to his wife...the rumors start to fly!

3. Shakespeare Was the Original Viral Meme

This is one of those Shakespeare facts that’s especially compelling, even years later, since the Bard is credited with creating phrases we still use today!

Even before social media and those ubiquitous cat videos, there were Shakespeare phrases from his works that made their way from person to person, cementing themselves into our modern vernacular.

4. The Bard Knew How to Use Failure

The importance of failure is often spoken of today, but Shakespeare seemed to know its value more than most. By 1592, Shakespeare was already attracting notice as an up-and-coming playwright. Unfortunately, plague outbreaks throughout Europe forced London theaters to close for two years.

Shakespeare, however, was undeterred and tried his hand at poetry, beginning a career that would span more than 150 sonnets and include some plays written completely in verse. Sonnets are as much a part of the man’s lore as his plays but had the plague not forced him to learn a new skill; we might never have known his beautiful poetry.

By 1594, the outbreaks had died out, and the playwright helped found the King’s Men, a theater group in London that quickly became extremely popular (and, no doubt, profitable for the budding writer and entrepreneur).

Even this venture was not safe from failure, however; another of our Shakespeare facts tell us that just three years later the group was unable to extend its lease. Shakespeare found investors to finance and build a new theater on the Thames. They called it, “The Globe.”

5. We Owe Much to Shakespeare’s Friends

The printing press had already been around for over a century when Shakespeare began his writing career, but the playwright had no interest whatsoever in making his works available in written form.

In fact, due to zero copyright laws back in those days, plagiarism was rampant, and it was common for very little of the manuscript to exist so that it couldn’t be copied. In fact, actors were often given their lines only just before their performance (sometimes even during it!).

Sadly, all this means that we have no original Shakespeare manuscripts today. Fortunately, however, some of Shakespeare’s friends and fellow actors took it upon themselves to publish a collection of their friend’s works after his death in 1616.

One can only wonder how much of Shakespeare’s works we don’t have today--despite the fact that we know of at least 37 plays and 154 sonnets.

6. Whatever You Do, Don’t Disturb His Grave

While it was common for graves to be open and bones to be moved--or opened so additional family members (i.e., wives) could be added after their deaths), Shakespeare took matters into his own hands.

The Bard penned his epitaph, which reads: “Good friend, for Jesus’ sake forbeare, To dig the dust enclosed here. Blessed be the man that spares these stones, And cursed be he that moves my bones.”

Whether it was a coincidence or not, the truth of the matter is that Shakespeare’s grave has never been plundered, and his final residence inside a Stratford church has remained unperturbed for all these years.

While we don’t know the exact date of William’s birth, we do know the date of his death (April 23, 1616) at 52 years of age (he would have been considered an old man back then, as most men lived to be only 30 or 40). We also don’t know exactly how he died, but there are some who suspect he penned his epitaph himself to keep his wife (see above) from being buried with him!

Despite his apparent distaste for his wife, Shakespeare might have been something of a feminist. Or at least, he might have had a passionate love affair with a feminist, and that’s the same thing, right?

Emilia Lanier was a poet and courtier who may have been the inspiration for the “dark lady” who inspired some of Shakespeare’s most amorous poetry. She, herself, was an early feminist, exposing double standards and defending women from the onslaught of male intellectualism.

Because the character of Emilia in Othello shares a name, a Venetian background, and many of the most feminist lines in all his work, many believe Emilia inspired Shakespeare’s play.

8. He Brought Back the Gold Hoop

A simple gold hoop earring is a fashion statement today--and apparently, it was in Shakespeare’s day, as well! Believed to be made popular by sailors, who wore conveniently-placed gold earrings to pay for their funerals should they die while at sea, gold hoops symbolized a carefree, boho lifestyle that writers flocked towards even in Shakespeare’s day!

The writer had been painted in multiple portraits from the 1600s, but the most famous features the Bard with a scruffy pointed beard and a gold hoop earring. The portrait, named after its owner, is called the Chandos portrait and has become one of the most famous depictions of Shakespeare today.

9. Maybe Not the Birds Next Time 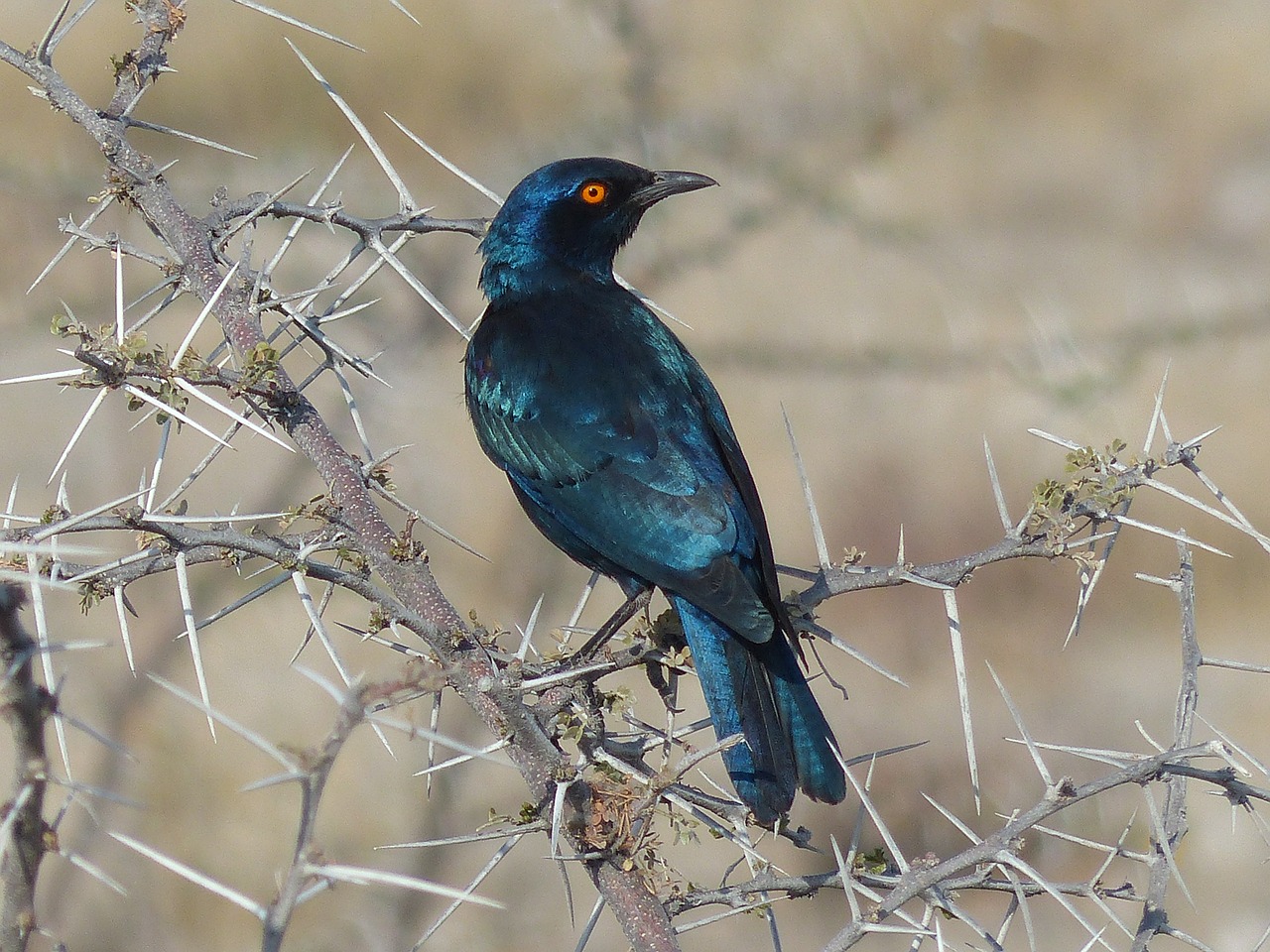 Starlings are pretty, glossy birds that soar gracefully. They are, however, the undisputed pests of the bird world. Raucous and damaging to native species, starlings didn’t exist in the United States until businessman Eugene Schieffelin, inspired by a single mention of the starling in Henry IV, imported over one hundred of the birds from Europe and released them into Central Park in New York.

Without their native ecosystem and predators to keep them in check, the birds multiplied rapidly. Today, they’re almost ubiquitous and nearly impossible to get rid of and have put native bird species at risk. And we owe it all to Shakespeare…

That’s not gibberish; it’s Klingon for, “to be or not to be,” the famous line from Shakespeare’s Hamlet. While, to our knowledge, Hamlet has never been performed by Star Trek fans in their original language, Klingon is just one of the many, many languages the Bard’s sonnets and plays have been translated into.

Just as in the 1500s and 1600s, when Shakespeare wrote his plays for people from all walks of life and socioeconomic backgrounds, so, today, Shakespeare is loved and appreciated by people from every cross section of life. High praise, indeed, for a man who never left his island!

We hope you’ve enjoyed these Shakespeare facts; it’s safe to say that despite all the scandals, setbacks, and ecological disasters, William Shakespeare is still as enigmatic today as his works.