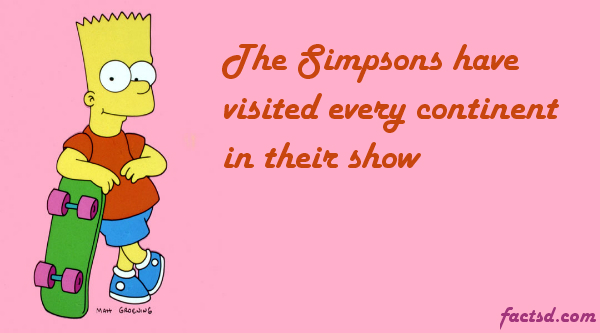 Simpsons facts: Interesting facts about Simpsons. The Simpsons, an animated sitcom is arguably the most iconic show of modern television.  It is a satirical depiction of working class life represented by the Simpson family. The Simpson family consists of Homer, Marge, Bart, Lisa and Maggie. It debuted on December 17, 1989 and soon became a major hit for Fox. The 28th season began on September 25, 2016. It is not only the longest running American sitcom but also the longest running American animated program. Let’s explore more facts about The Simpsons.

Simpson’s doesn’t have a specific first episode. The first episode was “Some Enchanted Evening”, which was pushed to the end of the season because scenes were being re-animated.

Since the fifth season in 1994, the running time of the episodes were shortened by two minutes.

Tomacco from the Simpsons actually exists; these tomatoes have nicotine in them.

The height of Marge’s hair is increasing with each passing year. By season 23, her hair would be 40% taller than it was in season 1.

There are 602 episodes of The Simpsons till now.

“Corruptus in Extremis” is the official city motto for Springfield.

The United States Postal Service unveiled a series of 44 cent stamps in April 2009, to commemorate the shows 20th

A clause in the creator’s contract mentions that the network can’t make cuts, exert creative control over episodes, which means that the produces can make fun of Fox. One such instance is where Krusty said “You’re Fox! You’re Fox known for taking chances on crap!”

It takes 6 months to make an episode of The Simpsons.