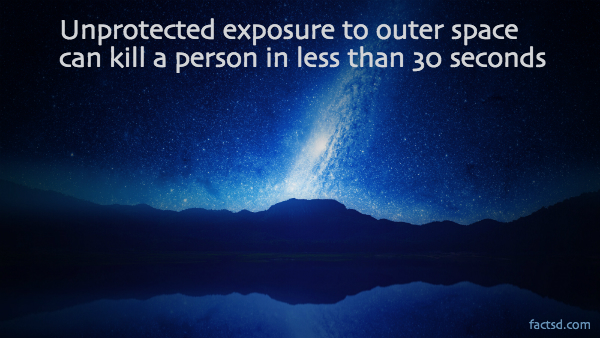 Space facts – Interesting facts about space. The Solar system and the vast expanse of endless space around us is a bizarre place with alien worlds, and strange phenomenon, liquid methane spewing volcanoes, gargantuan canyons the size of US on Mars and every possibility of a giant planet lurking deep in the space beyond the orbit of Neptune. We are still to encounter another alien intelligent species like our self and the possibility is increasing every day with advances in science.

Neutron Stars are one of the final stages of high mass stars and are formed when the core of a supernova star explosion collapses and it rotates rapidly which can be anywhere between 60 times to 600 times per second.

The space is an expansive place and common units of measurement will not be sufficient. So astronomers have used light years or the distance traveled by light in a year to represent distances between galaxies and other far out celestial bodies.

The distance between the Earth and its parent star is known as an astronomical unit or AU and it equals 8 light minutes and 19 light seconds which comes out to be 149.597 million kilometers

Another unit which is used in astronomer’s parlance is the parsec and it measures 3.26 light years and is a function of an astronomical unit and a parallax angle of 1 degree. It can also be denoted as from “parallax of one arc second”

The largest star to be located till date is UY Scuti, a huge red supergiant which is located 9500 light years away in the Scutum constellation. It is 1,708 times larger than the size of the Sun.

Though it is not possible to know the exact size of the universe, since it is constantly expanding and therefore it is difficult for the light from the outermost reaches of the cosmos to reach us but taking into account the red shift, we can roughly gauge the size of the universe as at least 46 billion light years across. The universe is estimated to be 13.82 billion years old.

This means that the space is a crowded place and there are possibilities of galaxies colliding! Yes it is possible and our Milky Way galaxy is going to collide with collision with Andromeda galaxy but don’t worry it will not happen in our life time and will occur 4 billion years from now.

Our very own home galaxy, Milky Way is a spiral galaxy of modest size with a super massive black hole at its center and is roughly 100 to 200 thousand light years wide. Compare this with the biggest galaxy, the IC 1101 which is 30 times bigger than the Milky Way and is inhabited by 100 trillion stars. It is an elliptical galaxy with a span of 5.8 million light years.

On July 9, 1962 the US conducted a nuclear test in outer space and the thermo-nuclear device was carried atop a Thor rocket and the explosion took place at an altitude of 250 miles.