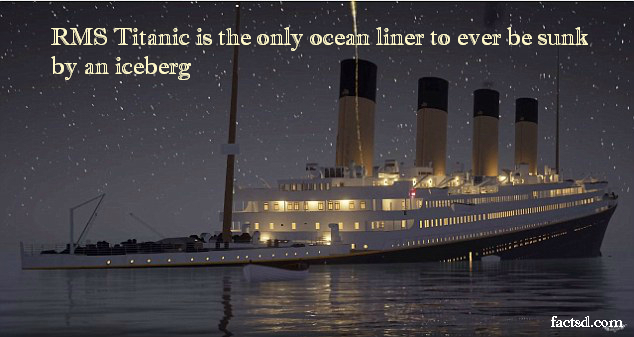 Titanic facts: Interesting facts about the Titanic. RMS Titanic, a British passenger liner that sank in the North Atlantic Ocean on 15 April 1912, after colliding with an iceberg during her maiden voyage from Southampton to New York City. Titanic was the largest ship afloat at that time. Explore interesting facts about Titanic ship and its demise.

RMS Titanic is the only ocean liner to ever be sunk by an iceberg.

Not a single engineer, out of the 30, made it off the Titanic. They stayed and kept the power on so that others could escape.

In 1898, 14 years before the Titanic sank, a novel called “Futility: The wreck of Titan” was written by Morgan Robertson. It was about an unsinkable ship called the “Titan” that crashed into an iceberg and sank.

Titanic survivors were charged $1 per word to send telegrams from their lifeboat. One man used his last dollar to send the word ‘Safe’ to his mother.

After the Titanic sinking, almost all of those in the water died of cardiac arrest or other bodily reactions to freezing water, within 15-30 minutes.

The titanic was initially known as the SS Titanic (where SS standing for Screw Streamer, i.e. driven by screws or propellers, also standing for Steamship), only becoming officially recognized as the RMS Titanic after first carrying the Royal Mail. RMS refers to Royal Mail Ship or Royal Mail Streamer.

All ships, military and civilian, that were under the British flag carried a distinction of “R.M.S.” This gave the ship the protection of the British Crown. An attack on an R.M.S. was considered an attack on the crown and an act of war.

According to a theory, full moon on January 4, 1912, may have created unusually strong tides that caused the iceberg to cross the paths with the ship.

Upon realizing the great vessel was doomed, Thomas Andrews, its designer, clapped his forehead and exclaimed, “Oh my God, I knew should have used the new iceberg-resistant steel, but no, I had to save a few pennies.”

The titanic seemed to have everything on boars, including its own newspaper. The Atlantic Daily Bulletin was printed every day on board. It included news, stock prices, society gossips, horse –racing results, advertisements and the day’s menu.