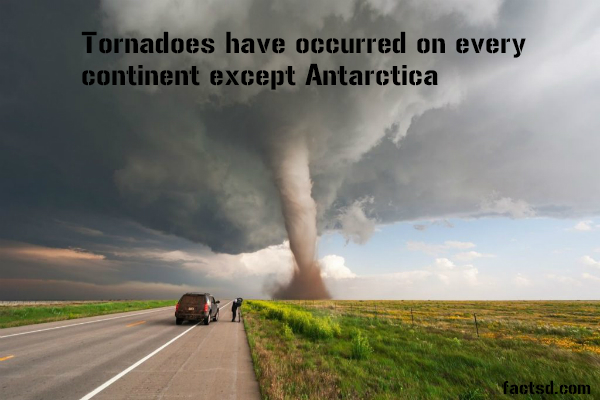 Tornado facts: Interesting facts about Tornadoes. Nothing can be scarier than the shrieking winds and powerful of a tornado. Tornadoes are the one of the most destructive phenomena to menace our planet. They are violent storms which takes huge toll of death. Tornadoes are spinning tube of air that touches both the ground and the cloud, resembling the trunk of an elephant. They are powerful and destructive that takes anything that comes along their way; the winds are so strong that they rip off the roofs of houses. Tornadoes give little to no warning before their arrival, not giving much time to vacate the location. Storm chasers are people who chase tornadoes to provide live coverage or a documentary of tornado, these people are nothing less than daredevils who risk their life to get once in a lifetime shot. Tornadoes are one of nature’s ways of reminding us of its awesome power. Here are interesting facts about tornadoes.

The rapidly spinning tube of air that touches both the cloud and the air is called as tornado.

Tornadoes have occurred on every continent except Antarctica.

Tornadoes are more deadly at night than during the day.

A tornado can hit one house and miss the next one completely because of its ability to hop.

Tornado comes with no warning; the average lead time for tornado warning is around 13 minutes.

Flying debris causes more injuries and deaths during a tornado.

Tornadoes make infrasound, which is below 20Hz range that is below the normal range of human hearing.

Tornadoes have been officially recorded since 1950, and there are no records earlier to that.

The fastest winds on earth occur inside tornadoes.

The formation of a tornado is a mystery which is yet to be resolved.