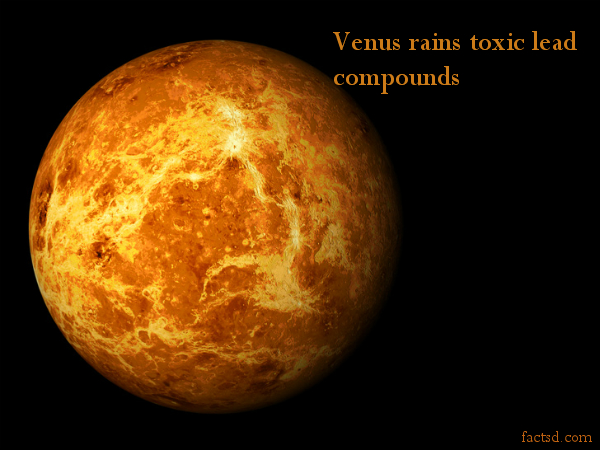 Venus atmosphere once killed spacecraft: The Soviet Venera probes that ventured to the surface didn’t last more than two hours.

Your voice would be deeper on Venus because its dense atmosphere would cause your vocal cords to vibrate more slowly.

Lightning is produced on Venus, caused by the sulfuric acid in the clouds.

Venus has a unique lave feature called a “pancake’ dome or farra. It is 20 miles across and 300 feet high large pancake of lava.

Venus appears to have phases like moon as it orbits the sun within the Earth’s orbit.

The mountains and craters on Venus are named after females, for instance the crater called Billie Holiday is named after a female American jazz singer.

Venus and Mercury are rare planets where we can see it cross in front of the sun. Venus transits occur rarely, with pairs separated by eight years around less than once a century.

Venus like Earth has a limited lifespan. As the sun swells to become a red giant star in a few thousand million years, it will engulf Mercury, Venus and Earth along the process.

Unlike other planets, Venus had no craters smaller than 1.25 miles across on its surface. Because of dense atmosphere smaller asteroids are crushed to powder before they reach the surface of the planet.