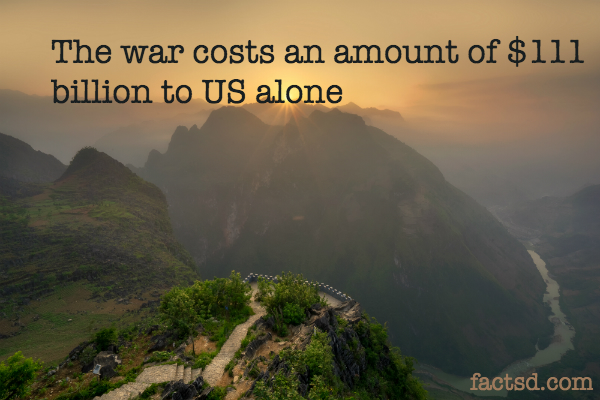 If you like interesting facts about Vietnam war, first you should know that the war that is popularly known as Vietnam War to the world is known as ‘American War’ in the country itself.

According to the Vietnamese it was ‘War against America’ to save their nation.

The war started during 1954 and continued till 1975. It ended with the fall of Saigon 30 April 1975. It is considered to be the longest tenure in which US has been involved, that is more than 20 years in a war.

Location where the war was held was North Vietnam, South Vietnam, Cambodia and Laos.

The main reason behind the war was that Vietnam that was separated into North and South Vietnam had different policy. North Vietnam was communist and they did not support the US alignment with South Vietnam.

North Vietnam wanted the two nations to be united into Vietnam and South Vietnam and United States was against this ‘Domino effect’ and thus tried to stop this from happening.

The NVA or North Vietnamese Army was sustained by the China, Soviet Union, and other communist allies. Similarly the South Vietnamese had support from America, Australia, South Korea, Thailand and other anti-communist countries.

America wanted to stop the Domino Effect that is the spread of communism in different parts of the world. It was held during the period when Cold war was at its best.

US didn’t participate during this period actively. They were mainly military advisors.