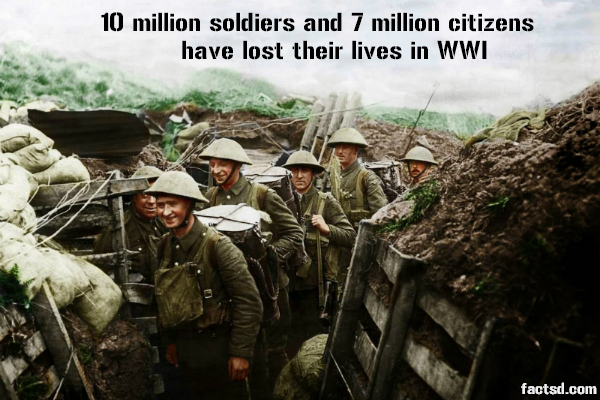 World War 1(WW1) Facts: Unknown facts about WWI. The World War I caused a millions of lives into dust and unleashes the man for introducing new technologies in warfare. It was first time a global war was battled in seas and skies. The War is between the Allies (France, Italy, Great Britain and United States) and Central Powers (Austria-Hungary, Germany and Turks). The other nations joined themselves with either of the side to confront in War. World War 1 war was triggered due to the assassination of Franz Ferdinand, the Archduke of Austria-Hungary by the Serbian Nationalist Gavrilo princip. After which Austria-Hungary declared war on Serbia and soon other countries allied to treaty sides. The war resulted in division and punishment of countries. When central power countries were signed in Armistice Agreements and Germany signed the Treaty of Versailles that caused losing territories, economic reparations and limited rights given to empower military development. It became a significant cause to uphold the End of war but led to the beginning of World War II.

10 million soldiers and 7 million citizens have lost their lives in WWI.

In WWI, 1/3rd of the military soldiers have died due to Spanish Flu.

In 1917, Germany invaded U.S to infiltrate the lost territories of Texas, New Mexico and Arizona, and in between invited Mexico to join hands with them in WWI.

In WWI, U.S is considered to be having the world’s largest military power.

Since the end of WWI in 1918 the room of the French soldier is still untouched.

A Homing Pigeon saved 194 Frontline Battalion soldiers by delivering a message of in front danger even though a bullet shot through the chest that cost an eye and a leg.

In WWI a Hungarian soldier, Paul Kern was shot at Frontal lobe of the head which made him unable to sleep for 40 years until he died.

The Mustard Gas used during WWI is a By-Product of Chemotherapy.