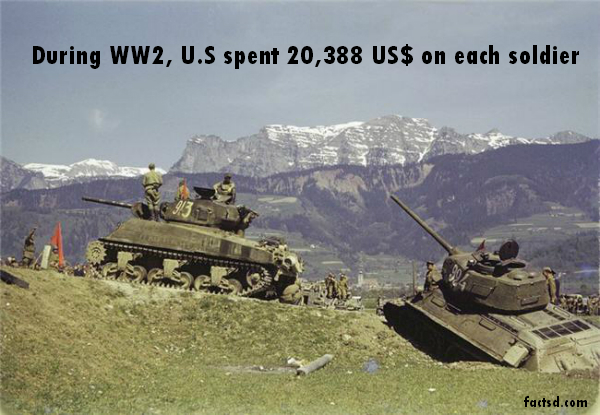 World War 2 facts – Unknown facts about World War 2. The World War II is considered as the most horrific period of the 20th century. Some say it’s the continuance of the World War 1 and the intermediate period was the preparation time taken by different nations to continue the war. Germany signed the Treaty of Versailles after WWI that deprived them to rise upon the world which triggered the global catastrophe. Nations joined either The Allies or The Axis. At the end it is declared that around 100 million people from 30 countries were involved in WWII and fatality of 50 to 85 million. Apart from Destruction and Death, the WWII exposed some of most deadly war crimes, massacres, mass bombings, genocide, diseases and dtarvation. The World War 2 is the pioneer for advancement in warfare and technology. It led to the rise of the democracy all over the world. The impact of World War II on Humanity is by far the most bloodiest.

During WWII, Battle of Bulge is the largest and the deadliest battle for American soldiers where nearly 80,000 soldiers died.

During WWII, Germans killed 12 million people and 6 million of them were Jews murdered by Nazi’s.

During WWII, the German U boats destroyed 2000 Allied ships.

During WWII, Erich Hartman, a German Fighter pilot nicknamed Bubi by Germans, The Black Devil by Soviet and The Blond Knight by Allies was the Greatest Ace Fighter in aerial warfare of all nations combined with 352 victories.