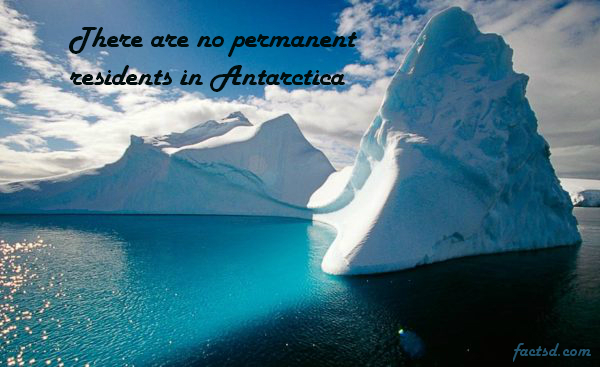 Antarctica facts: Interesting facts about Antarctica you probably didn’t know. Antarctica is the fifth largest and the southernmost continent covering 5.4 million square miles. The most remote and the recently discovered continent, surrounds the South Pole, the point at the Southern end of the Earth’s axis. It is almost covered by ice and is the least habitable place on Earth. Though the temperatures are not favorable, surprisingly many life forms exist including penguins,  insects, flowering plants, etc. Did you know that there is 8 times as much ice in Antarctica than Arctic, explore more amazing and interesting facts about Antarctica.

East Antarctica is colder than its western counterpart because of its higher elevation.

Antarctica grows bigger in winter and then this new ice breaks and melts in summer.

There is a fish in Antarctica called Ice fish that have no hemoglobin in their blood to carry oxygen.

There are no permanent residents in Antarctica.

Antarctica is so cold because 80% of solar radiation from sun is reflected back into space by ice and snow; the other 20% is absorbed by atmosphere or reflected by clouds.

Southern lights are observed in Antarctica near South Pole.

There are no countries in Antarctica.

The largest single mass of ice sheet on Earth is Antarctic Ice Sheet.

The Transantarctic Mountain divides Antarctica into East and West sections.

“.aq” is the internet country code for Antarctica.