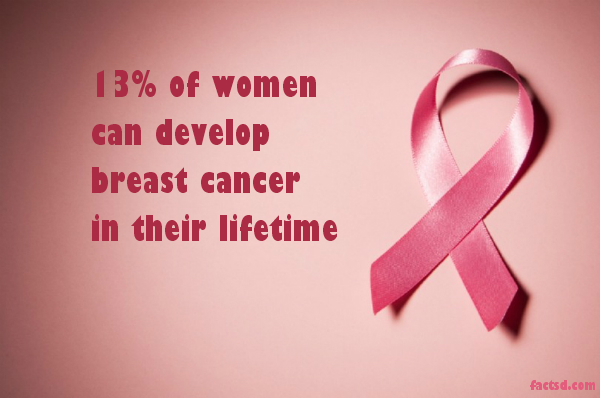 Breast Cancer Facts: Breast cancer is a disease where cancer cells are formed in the tissues of the breast. It starts when the cells in the breast dived and grow out of control. These cells can lump together forming a mass of tissue called tumor. Breast cancer like other cancers can invade and grow into the surrounding tissue of the breast. It can also travel to other parts of the body and form tumors called as metastasis. There are high survival rates when the cancer is detected in early stages, hence spreading awareness can increase the survival rate. Let’s explore facts about breast cancer.

No one dies if the breast cancer remains in the breast. But when the cancerous cells travel to a vital organ then it threatens life.

1 in 8 women are diagnosed with breast cancer in the U.S.

Breast cancer is the most common cancer diagnosed among women worldwide, after skin cancer.

The second leading cause of cancer death in women is breast cancer. The first being the lung cancer.

Breast cancer survivors are at high risk of osteoporosis. Estrogen has protective effect on bones and reduced levels can prompt bone loss.

Belgium has the highest incidence of breast cancer in the world, followed by Denmark and France in 2012.

Breast cancer is 100 times more common is women than in men.

On average, a woman is diagnosed with breast cancer in every 2 minutes and every 13 minutes 1 woman succumbs to it.

In U.S. there are over 2.8 million breast cancer survivors.