Learn Christmas facts about the holidays that will alter the way you see it! Find out the relatively unknown origins of Christmas and many of its most beloved symbols. 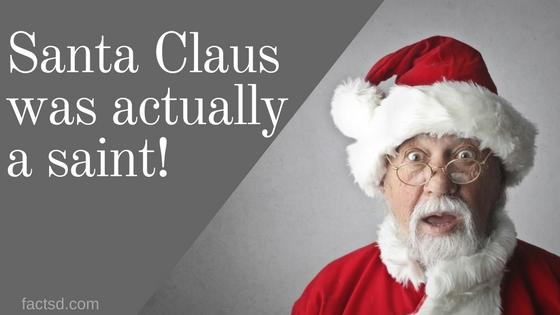 Christmas is arguably the most important holiday in America. No other day commands the reverence and spending that December the 25th does, not even close. But, how much do you know about the day? In theory, the holiday is over 2,000 years old. Christmas went through some changes in its meaning and how we celebrate it.

Of course, the way we celebrate the holiday today is our choice, and it likely won’t change anytime soon. But it is important to know where we have come from so that we aren’t doing anything under pretenses. Let’s dive into some lesser known Christmas facts that will change the way you see this holiday forever.

Scientists do not agree on when Jesus was born, but they know it wasn’t on the 25th of December.

Some scientists go by the fabled Star of Bethlehem, which could be some things. Chinese records show that a slow moving comet appeared in the sky around 5 B.C. which could account for the sign that heralded Jesus’s birth.

Other researchers suggest that Jupiter and Venus coming together may have created the illusion of a bright star in the sky, but that happened in June of 2 B.C.

It could also have been a convergence of Jupiter and Saturn, but that occurred in the Autumn of 7 B.C. If the star is what notes the birth of Christianity’s founder, then December is all wrong.

But what if it was just a normal star that was exaggerated or something that was unpredictable, like a meteor?

Well, then let’s look at the legend itself, in which shepherds are watching over their flocks during Jesus’s birth. This is not something that you do in winter but in the spring. Flocks are safely corralled during the winter months when there is no grass to eat in the pastures.

If we will follow the biblical narrative, then Jesus’s birth was closer to what we consider Easter than December 25th. This evidence does not suggest that Jesus was not real, however. It merely points out that we are wrong in attributing December 25th as Jesus’s birthday. The bible never mentioned December 25th also.

If you want to get super technical (and we do), Jesus’s December 25th was even different than ours. It was in the 16th century when the modern Gregorian Calendar we use today was introduced. So, why do we celebrate Christmas on December 25th? Well…

Christmas Is a Pagan Holiday That Was Appropriated by Christianity

Long before the birth of Jesus Christ, there was a holiday right around December 25th. People call this holiday, Saturnalia. This Roman holiday celebrated, as the name suggests, the god Saturn, with feasts and revelry. We would also like to note that these Saturnian celebrations were not very Christian by today’s standards. The Christmas facts don’t lie.

The festival celebrated life and the coming of the new year by the Julian Calendar, and it is not a coincidence that this festival took place near the Winter Solstice. This is a natural time of rebirth and the beginning of a new phase of life. There have been Winter Solstice celebrations since before even the Romans.

You might recognize some of the themes of Saturnalia, such as goodwill towards all, even slaves whose duties were suspended during the celebration. Also, revelers would decorate their homes with wreaths of greenery and wear special clothes. Not sweaters, probably, but special holiday attire nonetheless.

So why do we celebrate Christmas on a Pagan holiday?

Convenience, mostly. The Roman Catholic Church wanted to celebrate the birth of Christ to unite the Christian people in harmony, thereby making them easier to rule.

Fortunately, they were all already celebrating in late December, so the Church co-opted Saturnalia and told everyone that they were now celebrating Jesus. Because.

Next on our Christmas facts list is about Santa Claus. Everyone who knows about him probably also knows at least one other of his nicknames. Kris Kringle, Father Christmas, Pere Noel and of course, Jolly Old Saint Nick. That last one isn’t just a nickname, the mythical figure of Santa Claus has its roots with an actual saint from the 4th Century, Saint Nicholas. Bilingual Christmas celebrators may also know that Santa means saint in Spanish and similar words exist in other romance languages such as Santo and Sinter.

Saint Nicholas was a Greek bishop living in what is now Turkey.

He was a devout man, but also very rich because, as legend tells, he inherited large sums of money when his parents died while he was young. Nicholas did not flaunt or covet his wealth. However, he was very generous with it.

The legend goes that he once dropped bags of gold down a chimney to a poor but pious family who could not afford dowries (money to be paid to the groom) and therefore could not get married. These bags of gold accidentally landed in stockings that were hung by the fire to dry, and a tradition was born that holds up centuries later.

Saint Nicholas is also the patron saint of sailors and several European cities, but he is best known for being the blueprint for Santa Claus. But what about the beard, the robe, and the flying reindeer? Well, we have to go back to Paganism for that.

Much of Who Santa Is, We Got From a Pagan God

And not just any god, Wodan himself, who was the Germanic peoples’ version of Odin, the Allfather. Wodan was depicted as an old robed man with a long white beard, although his body fat percentage is not set in mythology until later centuries. He also happened to ride a horse (Odin’s Sleipnir) or sometimes a deer through to sky. Sound familiar?

Wodan was very active during Midwinter event called Yule (AKA Winter Solstice, Saturnalia, and Christmas). He would ride across the sky during the Wild Hunt in a ghostly procession. He didn’t ride eight reindeer on a sleigh, but his horse or sometimes reindeer had eight legs.

During this time Germanic Pagans would feast and come together around a Yule Log to strengthen the bonds of family and clan. Ring any (Christmas) bells? The Romans came to conquer the Germanic pagans. This led to the pagans celebrating the tradition.

Those most Christmas-y of symbols and their importance to Jesus are Christmas facts set in stone! As you can probably guess from the previous entries, this is not quite so.

Christmas trees have their roots in Pagan Germany, just like Santa Claus. Trees and other plants that stay green, even in the dead of winter are sacred and powerful. Germanic homes are adorned with evergreen trees and plants throughout the winter, perhaps to try and absorb some of their hardiness so that they could survive the harsh conditions.

People began to decorate these trees, and it was only a matter of time before Christianity absorbed the tradition and made something new.

Christian Germans would decorate their trees with apples to symbolize the Garden of Eden in the book of Genesis and call them “Paradise Trees.” The tradition spread with German immigrants throughout the world.

It wasn’t until the 19th century when Queen Victoria of England urged her German husband to decorate a Christmas tree. Word got out that the Queen was doing it, so naturally English and American elites followed suit and the tradition kept spreading. Now, about every home that celebrates Christmas has a tree, whether its an evergreen plant, plastic replica or green tape on the wall.

Christmas Is What We Make It

Regardless of its origins, Christmas is like every other tradition and idea of the modern era. Traditions don’t have to have accurate roots or be scientifically set to a particular day. Traditions are a choice, and we practice them for very tangible reasons.

Just because Christmas isn’t what you thought it was, it doesn’t mean you can’t celebrate it. Take your new knowledge of the holidays and educate others so you can all understand it better and connect more deeply to this now a global tradition. Just don’t let anyone tell you it’s only about Jesus and not Saturn, Odin, Pagans and trees that don’t die in winter because maybe they are magic or something.

This article sums up our list of Christmas facts, head on to our facts page to learn more exciting details about history, celebrities, places and more!