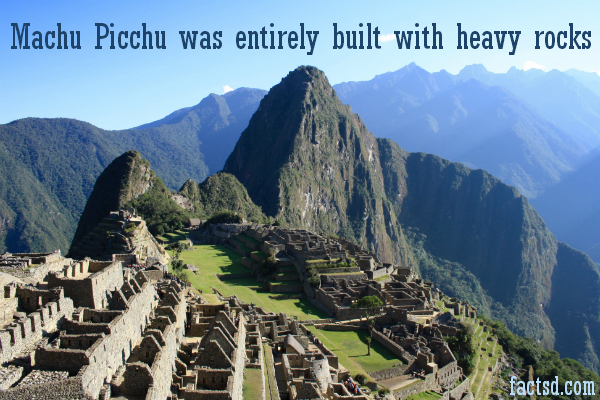 The Incan empire was the largest empire in the world during the 1400s, stretching 2,500 miles north to south and supporting over 10 million people.

Inca people had no written language.

The Incas has constructed 26,000 miles of roadways throughout their empire.

30% of the Machu Picchu has been reconstructed since its discovery to give a better idea of how it originally looked and the restoration continues.

The Inca revered many natural elements including the sun, moon, rivers and mountains.

Machu Picchu area is a no fly zone.

The entire city was constructed with heavy rocks and no wheels were used to transport those heavy rocks.

Machu Picchu is not much affected by earthquakes, the stones in the building bounce through the tremors and then fell back into place.

The technique called “ashlar” was used to build the structures. In this technique stones are cut to fit together without mortar.

Machu Picchu was never found by the Spanish conquistadors, who would otherwise have plundered and destroyed the city.